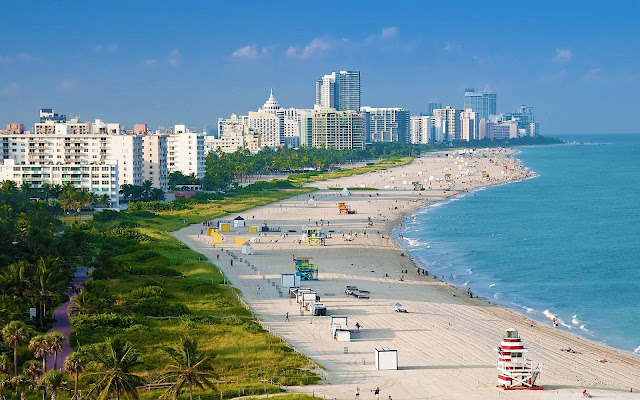 Beach blanket Babylon
The other afternoon Frank and I arrived in
Miami. Soon we were whisked across the bay
to that glorious stretch of sand better known
as Miami Beach. The sun was shining, the sky
was blue, the temperature was hovering in the
low seventies, and all was right in the world.
Upon checking into our hotel we were kindly
upgraded to a spacious suite. Yet quickly we
dumped our bags and walked out the beach.
Then down to Lincoln Road with it's shops
cafes, grit, and glam. And suddenly it was
as if time had stood still. We were in old yet
quite familiar territory. And it felt GREAT! 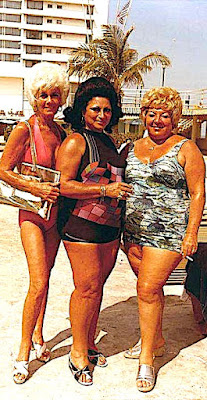 Past imperfect
I first hit Miami Beach for a fashion shoot in
the early nineties. I stayed at the Ritz Plaza
which sat in deco isolation far up Collins
Avenue at Seventeenth. From my window
I watched pigeons fly in out out of the empty
rooms of a hotel across the street. Where far
above stood the name "Delano" in tattered
relief. Who knew that a few years later Ian
Schrager and Philippe Starck would transform
it into the hippest hotel ever?! Or that block
after block of forlorn buildings filled with
aged snow birds would be redeveloped into
an art deco fashion and lifestyle mecca?! 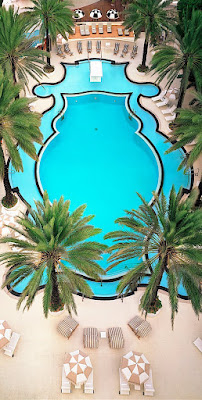 Familiar territory
The good news is that while said evolution had
continued during our decade long absence - in
truth nothing changed. The Raleigh Hotel is in
the midst of yet another renovation. This time
by Tommy Hilfiger. The De Lido - which when
we last visited was becoming a Ritz Carlton now
sits closed post damage from Hurricane Irma.
Still crowds stand and  wait for a table nightly
at tried and true Joes Stone Crab. Pacific Time
continues to dish it out - and Ocean Drive is
packed every night with an international mix
of tourists. However that doesn't mean that two
jaded re-visitors can't discover something new. 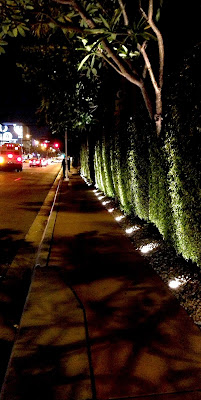 Hide & seek
As always our first night challenge was finding
a place to eat. Post trolling Trip Advisor, Yelp,
Zaggat, and Open Table we decided to try some
place just around the corner called Casa Tua.
Reviews indicated it was lovely but honestly,
we had no idea just how fabulous it would be.
The evening was chilly so rather than dine on
it's lush patio, we opted to be seated at a lovely
table inside. What followed can only be deemed
exceptionally elegant. The place simply oozed
low key chic. Everything was perfection. The
food, staff, and decor. Yet oddly it seemed very
familiar.  As if we'd been there, done that prior. 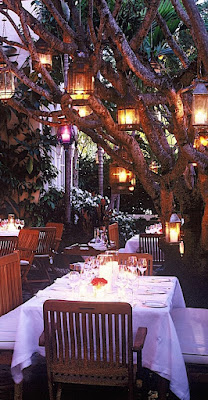 From the terrace
I must admit that both of us were rather taken
by surprise. Based on our experience - Miami
Beach inevitably goes over the top. In essence
this strip of sand is New York with palm trees.
Therefore it's mix of natural beauty and urban
grit is not for everyone. While we've always
appreciated said bravado, extended exposure
to it's hyper sensuality and boom boom beat
can make one weary. Possibly because in my
opinion everybody tries just a bit too hard to
be hip in this overt, pushup bra kind of a place.
All of which made our evening at Casa Tua
all the more extraordinary. Heaven on 17th. 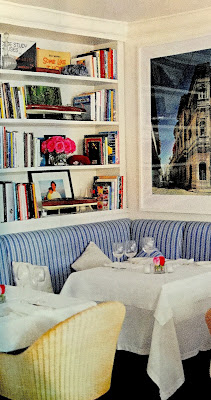 Deja vu
Frankly we had no idea what we had stumbled
on. Little did we know that hidden behind it's
hedges Casa Tua is a restaurant, 5 star hotel,
celebrity enclave and members only club. But
that isn't what makes it special. Elegance sets
Casa Tua apart from the rest..In fact the only
other place where we'd experienced a similar
level of elan was at the JK Hotel in Florence.
Both evenings were among the few we deem
beyond fabulous. Upon awakening the next
morning I hit the web and did my homework.
And as it turns out - both were designed by
Italian architect and decorator Michele Bonan. 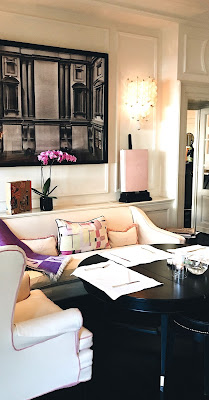 Elegant restraint
To be honest - I couldn'it recall having heard
of Mr. Bonan. While I'm addicted to anything
home related, he had not been on my radar.
Even if we'd both admired his work for years.
Not only does Michele create environments
that ooze with the elan of a world traveler -
they are also comfortable in the chicest, low
key manner possible. His work demonstrates
that the difference between fuss and finesse is
in the details. So once again we re-connected
with a new yet old acquaintance on Miami
Beach. Following are highlights of his work.
Please enjoy and have a lovely Saturday! 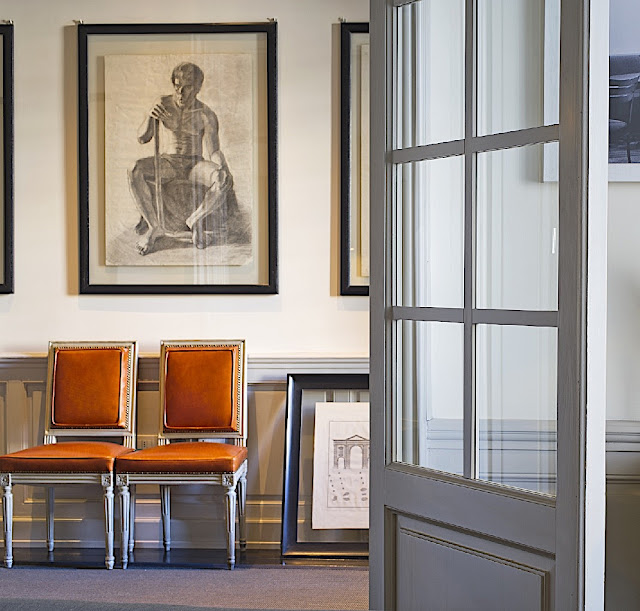 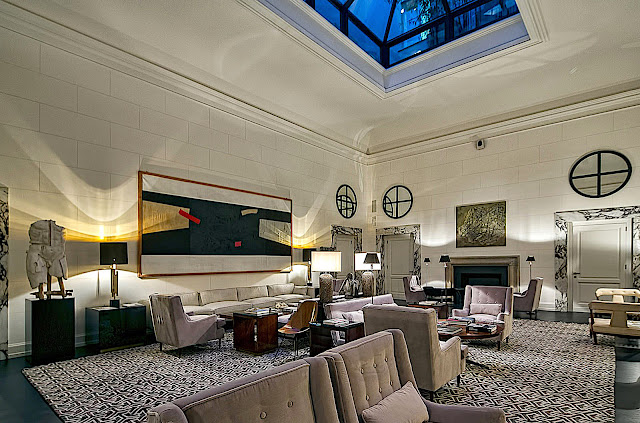 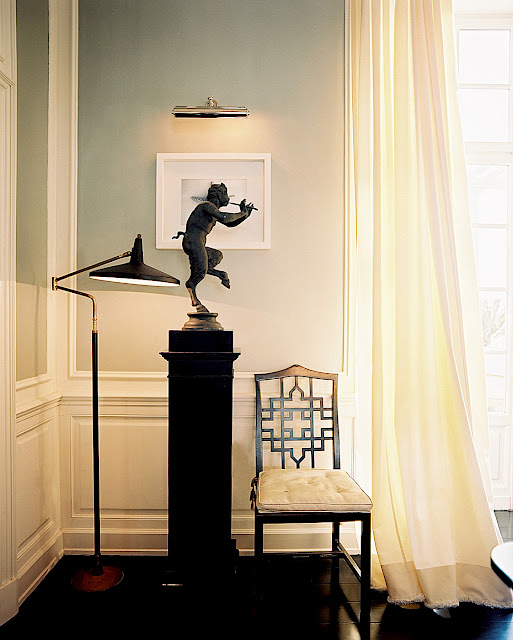 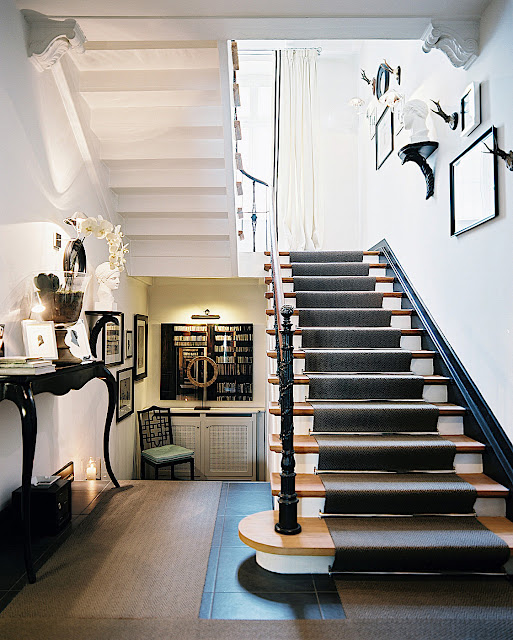 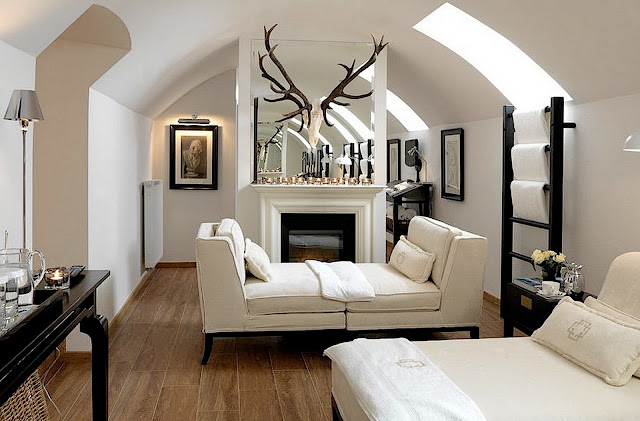 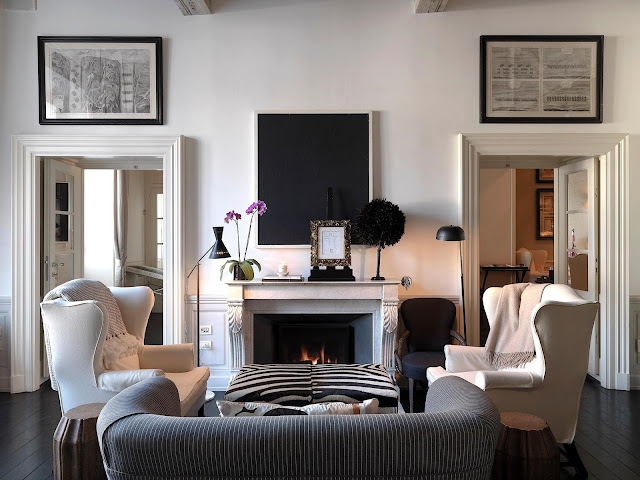 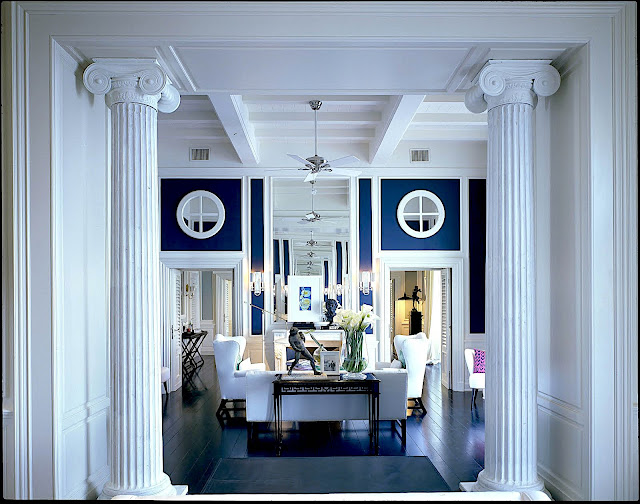 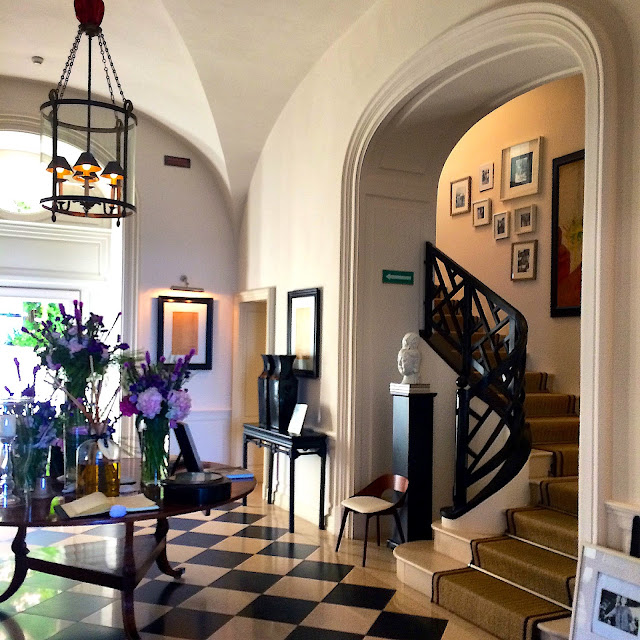 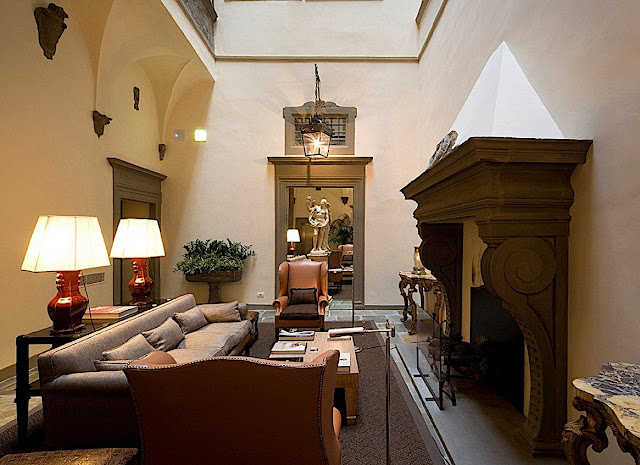 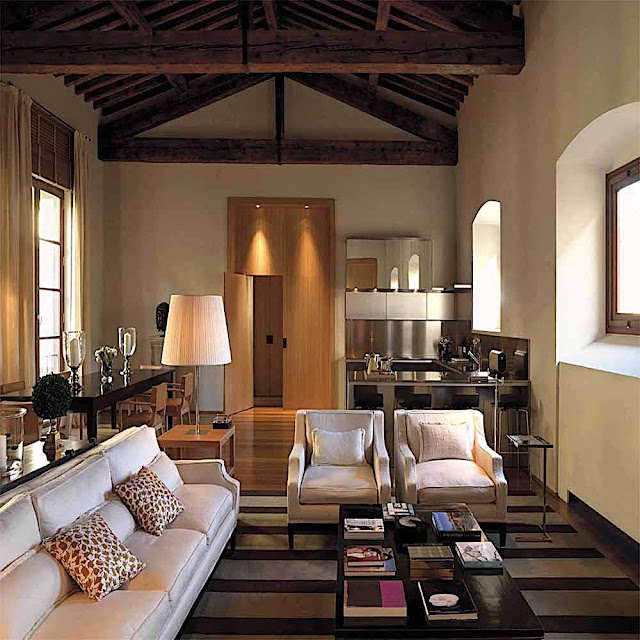 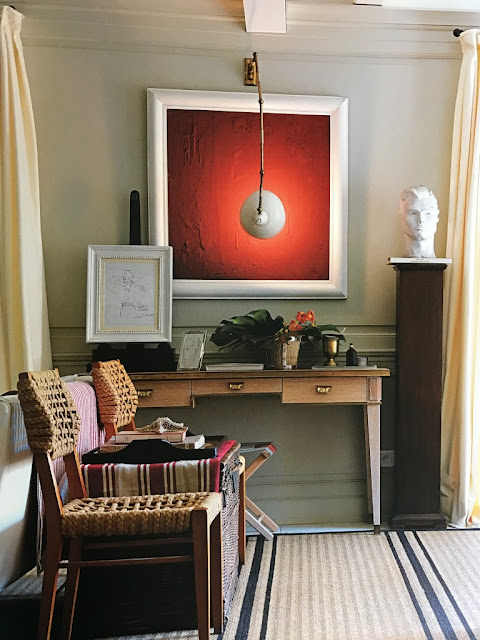 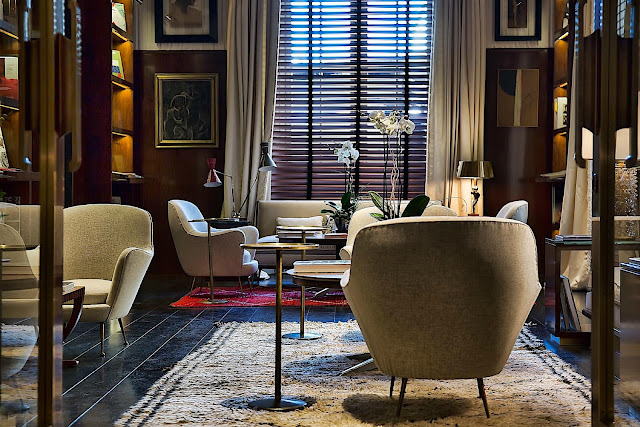 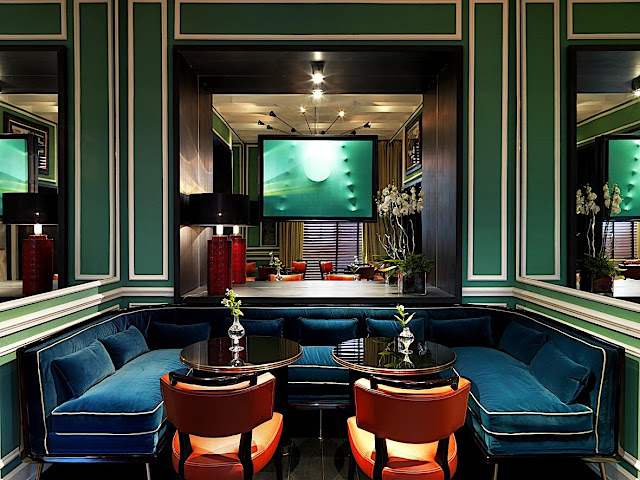 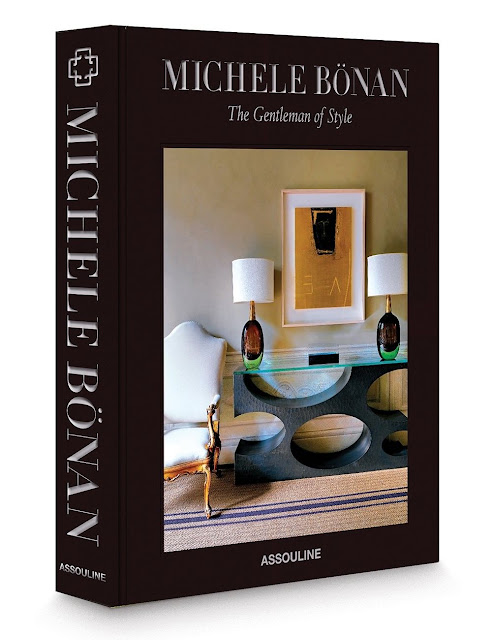 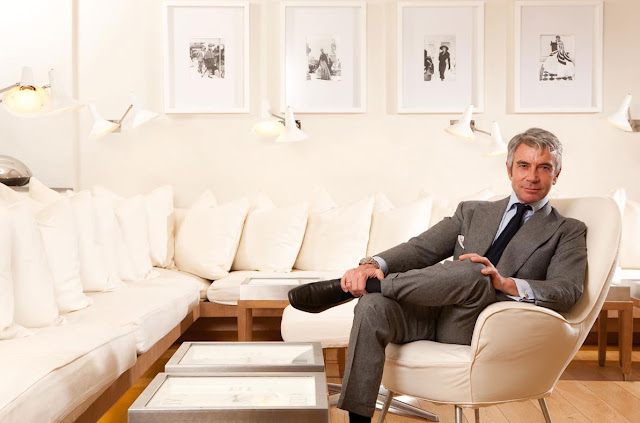