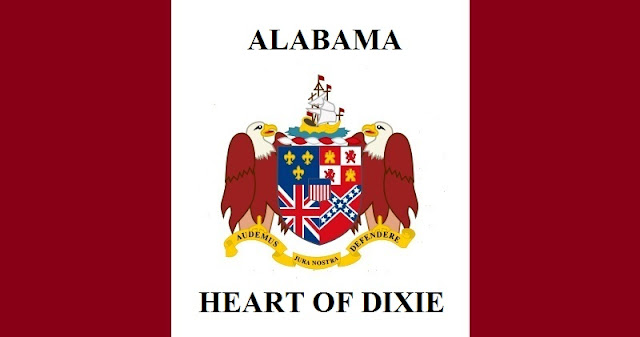 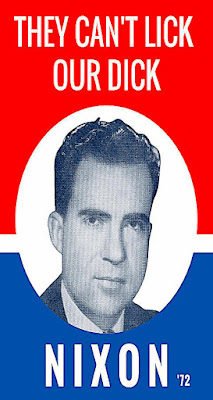 Against all odds?
In case you haven't figured it out... I'm what
some libel a liberal. However in truth such a
label doesn't necessarily define who I really
am. I was born into a Republican household.
Hence as conservative politically, socially,
and religiously as could be. As a tot I heard
my father blame "Roosevelt" (as in FDR) for
the decline and fall of western civilization.
Howard was so fervently right that he gave
cash to Jerry Falwell, tuned into Focus On
The Family, and still argued that Dick Nixon
was in fact innocent. Thus in theory my roots
run deep, red, and ALL AMERICAN!

Face to face with Jesus?
As I look at the mess we're in, I can't help but
wonder what my parents would think. As New
Yorkers they held their felllow citizen Donnie
Trump in disdain. Feeling he was an egoist,
social climber, and "crook" - it's doubtful they
would have ever voted for him. Yet if faced
with the dilemma that Alabama Republicans
are now struggling with, I know they would
be torn over what to do. As fundamentalists
they believed any born again Christian was
absolved of prior sins. Yet would my folks be
willing to forgive and forget in order to hand
an accused violator of women a senate seat!?

How do we measure up?
I know one thing. Which is that my parents
were a dichotomy. Neither were fans of the
women's "lib" movement. In fact my mother
avoided slacks as dad preferred she wear a
dress. Yet wardrobe aside Ethel wore the
pants in our family. Prior to civil rights -
both maintained friendships with African
Americans who we considered "family."
Fundamentalist to the core, somehow they
embraced their son and his same sex lover.
Thus while conservative they held diverse
opinions. Leaving me to wonder just how
Alabamans like them will vote on Tuesday. 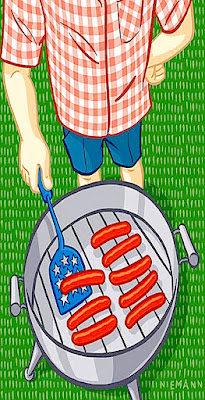 Grill or chill?
In truth we're all rather multi-dimensional. Few
if any think within a pre-defined box. Yet sadly
today's political leaders want to box us in. For
whatever reason they seem to think that decent
human beings - honest hardworking folk - will
do whatever they tell them to do. Whether it's
right... or wrong. However we're starting to see
that oppressive red tide turn in our favor. Smart
people are finally questioning whether it's worth
sacrificing one's morality to order win at any
cost. Thus one can only hope that on Tuesday
they'll vote with their conscience rather than
follow their leaders. What would Jesus do?!! 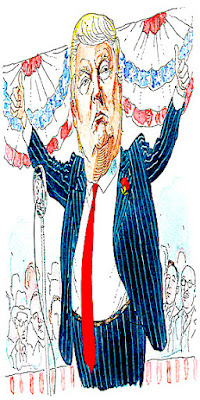 Politics as usual?
Rally rhetoric and robocalls aside - something
is happening here in America. Several recent
polls indicate that only 32% of us approve of
Donald J. Trump's performance as President.
Yet the man in charge prefers touts a poll that
places his fans at 45%. Rather than face reality -
Donald basks in the glory of adoring fans who
flock to Pensacola to laud their lord and master.
The question is where do the rest of Americans
stand? Who can support the endorsement of a
man accused of violating multiple teenagers?
Especially when it comes from a guy who has
been accused of the same by nineteen women?! 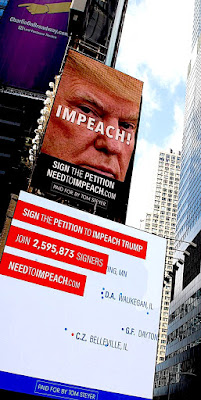 In or out?
As of yesterday, one percent of Americans had
signed a petition at www.needtoimpeach.com
This "movement" is funded by a sixty year old
billionaire, former hedge fund founder, and New
Yorker named Tom Steyer. Said initiative is the
personal bully pulpit of a passionate politico
who feels our current Chief Executive must exit
the oval office. So far he's spent at least twenty
million to air televised messages encouraging
Americans to oust Donald Trump. Add Times
Square billboards! While unprecedented it now
makes sense. After all we live in times where
nothing is surprising! When will we wake up? 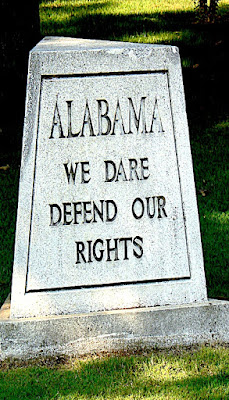 Truth or dare?
Where would you stand if you lived in
Alabama? Would you do the right thing
even if that meant losing the battle? Or
would you compromise all that you had
stood for to insure victory? Alabama's
state motto is - "Audemus jura nostra
defendere" which translates to "We Dare
Defend Our Rights." Will they be driven
by a need to prove that they are in control
whether we like it or not? Will right usurp
wrong? Will Alabama pass or fail this test
of moral judgement? Or throw yet another
log onto the funeral pyre of democracy?
Posted by montanaroue at 4:00 AM