Must we climb EVERY mountain?! 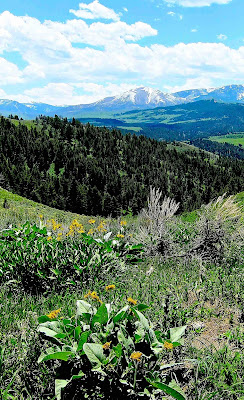 Mountain high
One might assume that given we live on
a rolling prairie surrounded by mountain
ranges we've climbed every mountain.
Sadly the truth is that since relocating to
rural Montana I myself have been more
than sedentary. A few weeks ago I started
on a new regimen of walking everywhere
possible. However who knew that here in
Portugal we would be scaling peaks and
valleys on a daily basis. Since our arrival
I have lost several inches while hitting
highs and lows I thought I never could
achieve. And I'm even breathing easier! 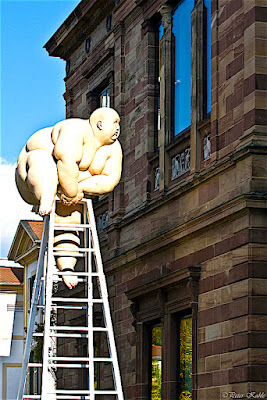 Off the charts
My i-phone has a heart symbol. If you
click on it, it tells you how many miles
you've walked and flights of stairs you
may have climbed. A few months ago,
the data would have shown that I was
not in tip top physical shape. Frankly
just climbing the stairs took my breath
away. Fortunately after almost of month
of ups and downs here in Portugal I'm
in better condition. Meaning my pants
aren't as tight and I'm able to squeeze
into a few more sport coats. All reason
enough to gladly break into a sweat. 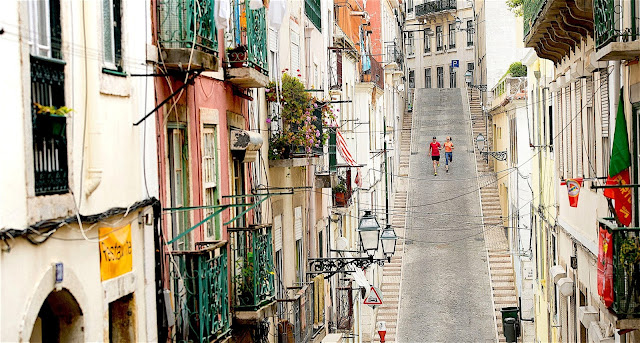 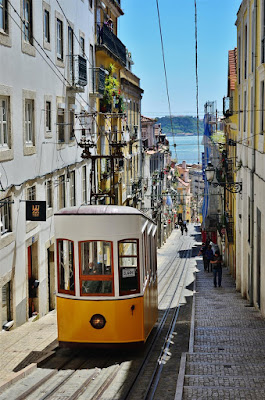 Rock and roll
While in Lisbon nothing stopped us
from exploring. Like an evil scout
leader Frank pushed me against all
odds whether I wanted to go or not.
Like an obedient mountain goat I
climbed every narrow street, alley,
stair, and byway we came upon. The
result was not only a reduction in my
girth but an expanded perspective on
that most magical of cities. I'll admit
I didn't always cooperate along the
way. However Frank once again led
me to places I'd never imagined. 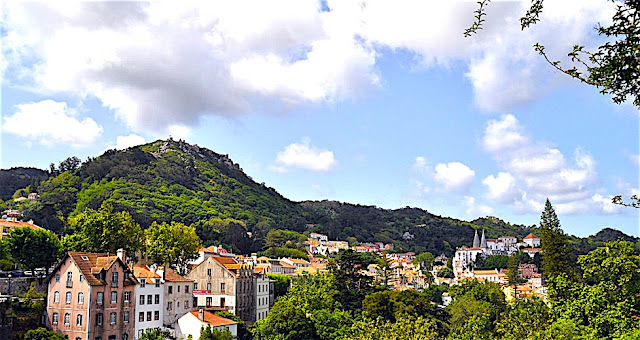 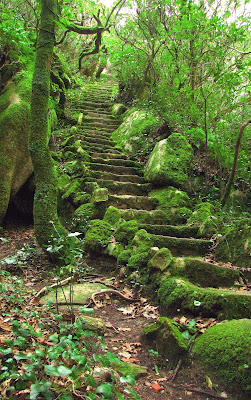 Blind leading the blind sided
When we journeyed to historic Sintra,
I did the leading. Unfortunately I'd no
idea where we were going. Fortunately
ignorance led to bliss. It's a short walk
from the train station to the village and
National Palace. I'd read in some guide
book that it was just a short stroll from
there to the Pena Palace. Actually it's
over two miles STRAIGHT UP. As we
started on our journey several taxis,
jitneys, and the like stopped to ask us
if we wanted a ride. Assuming that all
they cared about was cash, I said NO! 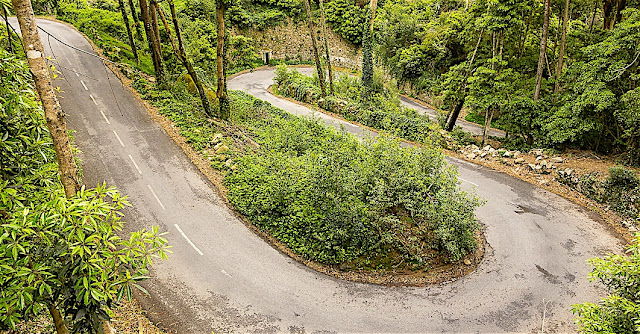 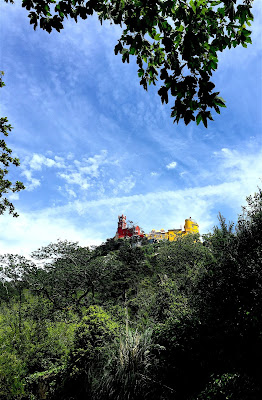 Road to redemption
For the next hour we ascended through
what can only be deemed a Portuguese
paradise. High in those mountains lies
the most verdant of forests filled with
flora, fauna, and architectural ruins. I'll
be honest that at times I worried if we'd
ever get there as for most of your climb
the palace was nowhere in sight. Yet the
beauty of our surroundings was beyond
intoxicating as we periodically stopped
to catch our breath. Finally there in the
distance atop the last hill sat the Palace.
We'd finally made it - alive no less! 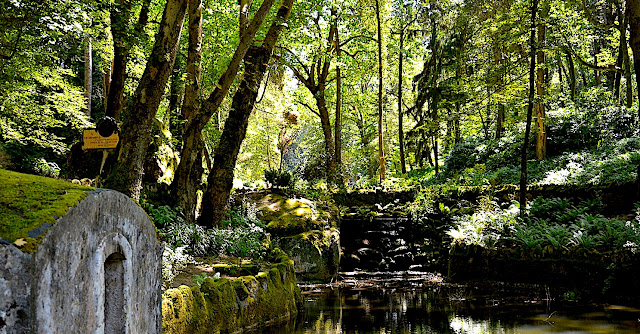 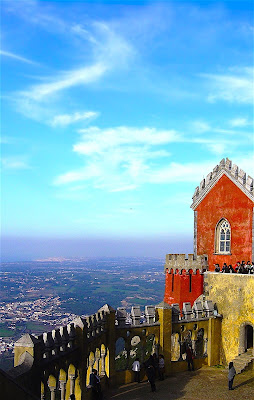 Kings of the world
Little did we know that it was a further
climb from the entrance gate up through
the palace gardens to the apex. However
now more than accomplished alpinists,
we continued to explore what man had
wrought within what my mother termed
"God's cathedral." By the time we finally
entered the palace itself, we'd seen such
natural beauty that it's accoutrements
paled in comparison. One thing was
certain - we were not walking down.
Thus after a ten minute cab ride we had
completed our higher education course. 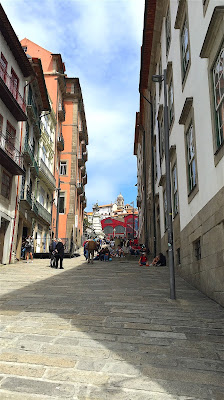 Down town
Porto is also hilly especially when it steeply
descends to the Douro River. As we strutted
our stuff I couldn't help but wonder what
others miss when they ride the tourist bus.
Here and there we soaked up more than our
fair share of local color on foot. Far more
than one could possibly see during a drive
by. We also mingled with the locals getting
a sense of the people. Inevitably while off
the beaten path every wrong turn ended
with an amazing discovery that otherwise
might have been be missed. Thus hitting
the pavement insures one is street smart. 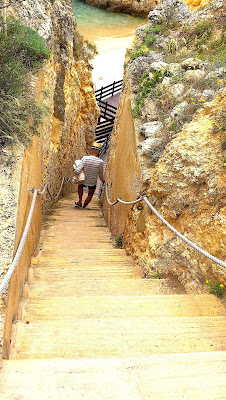 Deep sea diving
Way down south on the Algarve coast we've
easily risen above it. Our resort is perched
high above the Atlantic Ocean on a series
of amazing cliffs. Such an elevated vantage
point maximizes one's point of view. But
hitting our two beaches can be a downer.
The only way to get there is via a series of
steep stone steps carved out of terra firma.
Ultimately it's worth the trek once you're
down and out on one of the more beautiful
and private beaches imaginable. If only it
had a convenient bath room or the water
was warmer. That really pisses me off! 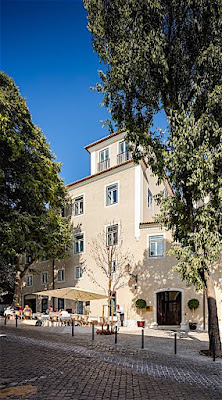 Last but not least
Sunday we return to Lisbon for the final leg
of our trip. During our first Alfama sojourn
we climbed a hill to a chic cafe. A table was
ready and waiting and before our pitcher of
Sangria was done, we'd fallen in love with
it's parent, the Santiago de Alfama Hotel.
Smitten we returned for dinner just a few
nights later. Our initial itinerary finished
at another hotel. However we decided to
change hostelries and end on a high note.
Our final days will now be spent there far
from reality. All the while knowing jet lag
awaits us in Billings. Talk about a downer!
Posted by montanaroue at 4:00 AM