TIME WAITS FOR NO MAN 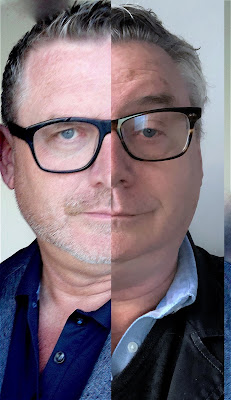 Time marches on
The other morning I encountered a stranger.
Exactly who was that older guy staring back
at me in the mirror? Upon reflection said all
too familiar visage was proof that aging is
if nothing else humbling. Bringing to mind
Mr. John "Black Jack" Bouvier, Jacqueline
Bouvier Kennedy's father. Or as my mother
oft said  "The most beautiful man EVER."
However as his evolutionary journey above
indicates... too much money, vanity, booze,
and sex cannot usurp the harsh reality that
time waits for no man. Rather it marches on.
Across one's crumbling facade that is... 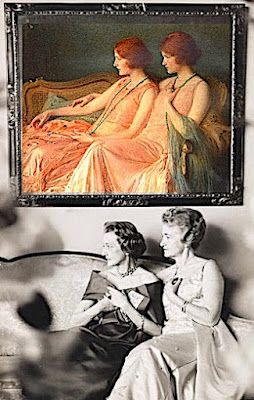 Balancing act
Change is a necessary evil. Some of
us are able to handle it's degradation
with dignity and aplomb. Like Black
Jack's twin baby sisters (shown right).
Dressed for JFK's inaugural ball, they
posed before their prior selves. With
little to lose given they'd been there -
done that. And yet somehow they
both found a way to live comfortably
to completion. Exactly why do many
battle versus embrace the inevitable?
Especially when fighting gravity is an
exercise in futility. We ALL fall down. 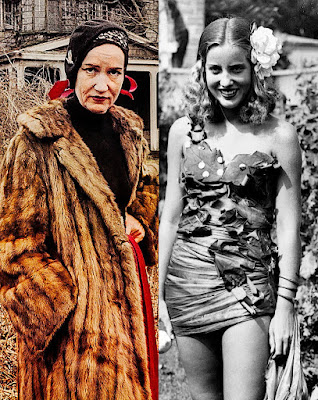 Sooner or later
In life many hit rock bottom.
Little is sadder than watching
older folks as they suffer the
consequences. As a deb little
Edie Beale - Jackie's cousin
had it all. By the end she had
next to nothing. As shown in
"Grey Gardens" said beauty
had a beast of a time coping
with reality. Barely surviving
proof that what goes around
comes around. Whether we
care to embrace it or NOT. 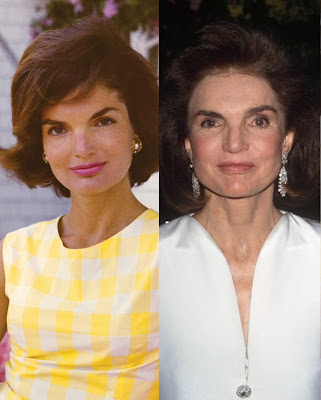 Amazing grace
Some go through hell and yet are
able to handle its' consequences.
Thus against all odds Jacqueline
Bouvier Kennedy Onassis aged
with grace, elan, and fortitude.
Ample indication that survival is
about attitude foremost. Which
reminds me of my mother-in-law
Pearl. From beginning to end she
made this world a better place
via a mix of kindness, beauty,
and humility. A perfect example
of growing old GRACEFULLY!
Posted by montanaroue at 4:00 AM