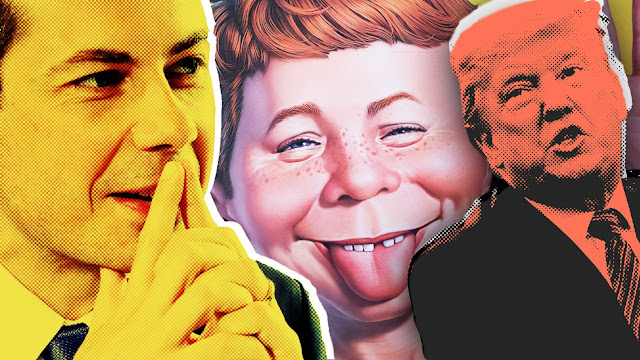 A nation torn asunder
Nowadays it's hard to separate fantasy from
reality. As I wrote this blog Senators stood
on the floor defending why they were about
to absolve their President's BAD behavior.
Meanwhile with only sixty two percent of
results reported Iowa's Democratic caucuses
seemed to indicate Mayor "Pete" Buttigieg
as the winner. And finally President Donald
J. Trump was poised to make his third State
of the Union address before the combined
houses and invited guests. Knowing all too
well that today he had a high probability of
ben acquitted of crimes against democracy. Neither here nor there
Lately it seems that every moment of every day
is a drama filled roller coaster ride of highs and
lows. Which makes it rather hard for any of us
to maintain equilibrium. And yet somehow in
the midst of said mania life goes on. Offering
a mix of both the good and bad. Said yin and
yang reminding us that even the best of times
are always balanced by the worst. Just when
one assumes things can't get any worse - they
suddenly change for the better. Hence it's been
proven that opposites attract. Which may be
why our choice for next president could range
from a misogynistic cur or a midwestern queer. 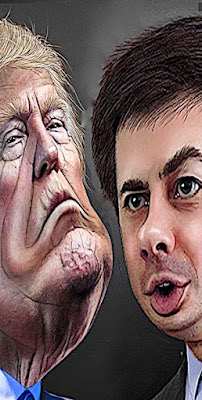 Before and after
Such a dichotomy should come as no surprise
to us. At least on the surface it seems as if our
country is split down the middle. With less
than half of our Senate standing up for what's
right. While the majority votes for the wrong
choice. Thus why shouldn't we entertain the
option of rejecting a repeat offender for a boy
scout who happens to like boys. Fortunately
even if Mayor Pete isn't straight, he couldn't be
more level headed. The truth be told he is the
polar opposite of Mr. Trump. Which may give
him a competitive edge. Who knows which side
of history we'll end up on? The choice is ours.
Posted by montanaroue at 4:00 AM