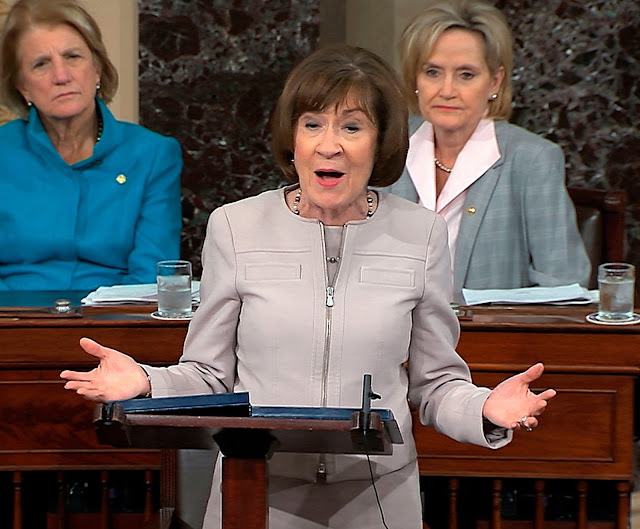 Blind leading the blind
I think I like Susan Collins. Well... not actually.
To be clear I respect Susan Collins. Even if we
don't agree. Friday afternoon Senator Collins
set an example for all leaders. She methodically
mapped out her views on Brett Kavanaugh in
a fair and clear manner. And while I have grave
issues with many of her points, I appreciate her
taking the time to explain her position. She not
only behaved like an adult but deftly treated her
colleagues and critics as just that. And somehow
rose far above the fray with dignity and aplomb.
Proving she's a class act. Even if she's wrong.
Hence I respect the lady but not her end result.

Justified homicide
I remain terrified of the negative impact that her
vote will have on our judicial system. Yet in an
odd way I'm grateful. Thankful that she stepped
up and took us all to a higher plane. Susan acted
like the leader her constituents elected her to be.
Even if some feel that she's either beyond naive
or... deftly justifying the errors of her ways. My
hope is that she's right and that the balance of
Americans on the other end are wrong. Yet deep
down I know that she has made a grave mistake.
My only consolation being that like any great
leader I'm fairly confident that Senator Collins
will hold herself accountable come what may. 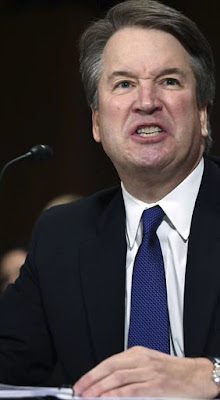 Best Brett?
Like it or not, she showed us how a leader
should act and communicate. She stood
behind that dais and spoke her piece. Her
only wavering being her quivering brittle
voice itself. What strikes me as quite sad
is that her performance was the diametric
opposite of Brett Kavanaugh's the week
prior. Rather than rant and rave, she held
the room's attention by clearly stating the
facts as she saw them. The antithesis of
her political cohorts and... the candidate
himself. All sans any excuses, dramatics,
accusations, or self serving Op Eds. 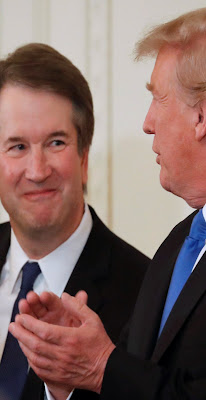 The biggest loser
In the end the "shenanigans" of both sides of
the floor were a test. A tenuous endurance test
that Mr. Kavanaugh failed greatly. And while
many claim he was an innocent victim of the
process, one might argue that the true victim
is our judicial system itself. How can we ever
trust it's outcome with obviously flawed men
such as he at the top? Most disheartening as
it could have been different. Had the judge
acted judiciously, he would have deliberately
stayed the course. Instead he sank to new and
acrimonious levels. Thus while he may "win"
American jurisprudence has lost big time.
Posted by montanaroue at 4:00 AM