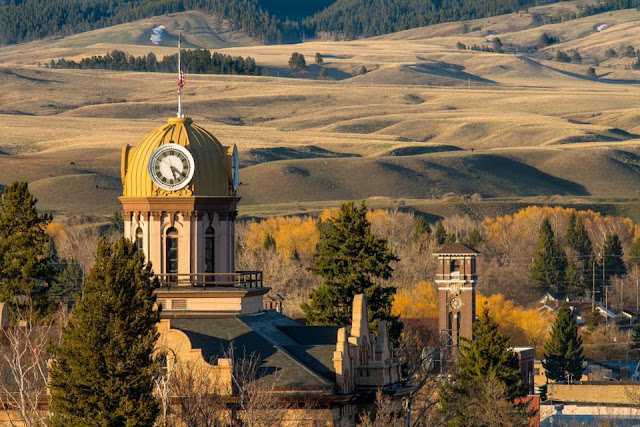 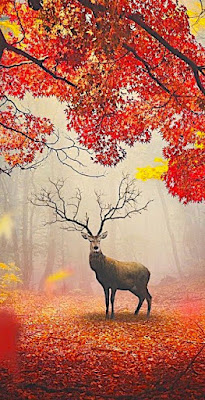 Sooner or later
Sometimes it seems that in central Montana
we're either behind or ahead. During our long
winters we wonder if spring will ever arrive.
Once it finally warms up, it still might snow
a foot before summer arrives soon thereafter.
The same applies to autumn. September just
may be our most beautiful month. However
this week may bring a hard frost. Meanwhile
our leaves are already starting to turn. Meaning
that before October begins we'll start raking.
Hence summer is but a brief interlude in Big
Sky country. Yet while feeling a bit cheated,
one can't but feel blessed to live in Lewistown. 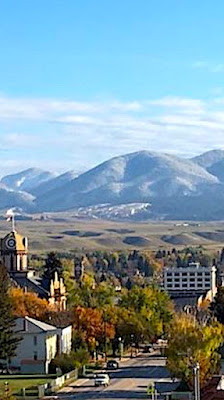 Peaks & valleys
For years many felt that Fergus County was
falling behind. Yet our problems were really
no different than comparable rural areas. Yet
naysayers questioned all attempts to adapt
to new challenges. Fortunately a dedicated
group of local residents, community and
business leaders never stopped believing.
And post their hard work - it seems that
great things are finally happening in the
heart of Montana. And while it took quite
a bit of time and  effort we're moving in an
upward direction. Even if that may require
dragging a few of us along for the ride...

Before and after
A few years ago, many considered the historic
Powers Mercantile building to be a community
liability. Some even suggested we were better
off tearing it down rather than trying to save it.
Fortunately a local (but transplanted) couple
took on the challenge. And a few weeks ago
the construction barriers came down to reveal
a restored facade and first floor. Instantaneously
transforming a major downtown block from
bedraggled to bedazzled. Then last week, The
American Prairie Reserve announced it had
purchased said structure for a new interactive
visitors center. Proving dreams do come true! Here to there
Said announcement is but one example that
Lewistown is moving from here to there...
from our past to our future. A process that
isn't a comfort zone for all involved. The
American Prairie Reserve is a non-profit
organization that is working to create the
largest nature reserve in the continental
United States. Ultimately three million
contiguous acres of public and APR lands
will be merged for conservation and public
access to create an "American Serengeti."
Meaning that soon bison and other almost
extinct wildlife will again roam our land. 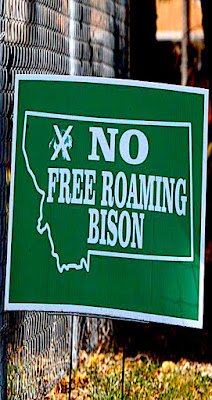 Then and now
While many welcome the APR, others do not.
I'm not going to get into the specifics of who,
what, where, or why. Each side in theory has
valid reasons for welcoming or resisting our
new neighbors. However I can't help but find
this rift as yet another example of Montana's
past battling it's future. Founded in the 1880's
Lewistown has seen much over our somewhat
brief tenure. From gold to homesteading to
cold war missiles to oil - it's been a constant
cycle of boom or bust. Hence ongoing change
has always been part of our local experience.
Whether we like it or... not. 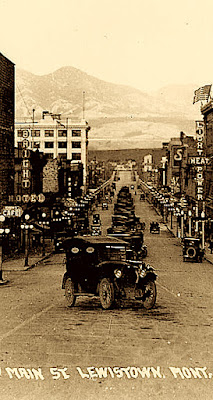 Tried and true
For thousands of years this rough and tumble
terrain was truly the wild west. Then a steady
stream of newcomers came and changed it to
their liking. If we're honest, while much of
what they did was good, an equal amount of
their changes were questionable at best. Some
worked, others failed. Said cycle has continued
decade after decade. Leaving radical changes
in it's wake. Thus in theory we should be fairly
facile as a result of such endless evolution. So
why are we our own worst enemies? Doing
anything possible to hold onto what already
may be past imperfect? Are we that scared?!

Now or never
The original settlers of this place did whatever
it took to survive. Therefore city folk became
ranchers and ranchers became bankers. One
thing was certain - constant reinvention was
required to adapt to new circumstances. At
times they lost everything only to start anew.
The question is when did we lose their pioneer
spirit? Rather than embrace opportunity we lock
our gates (and minds) to new alternatives. Fact
is change is on the horizon. Something tells me
that those who made Fergus County what it is
today - would welcome a chance to insure it's
future. Isn't it time we changed for the better?
Posted by montanaroue at 4:00 AM