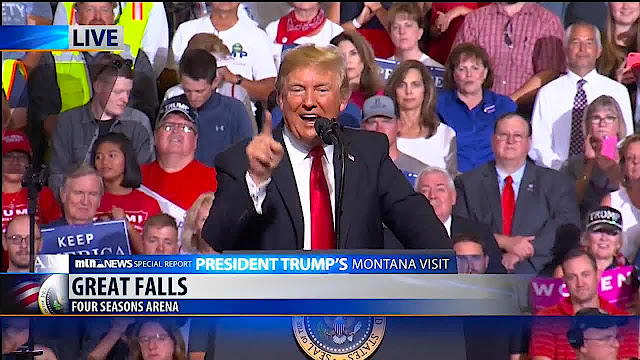 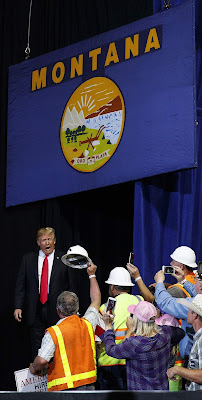 The treasure state
On Thursday an interloper descended upon
our fair state of Montana. Within just a few
hours Donald Trump popped in and out of
our piece of paradise. Time enough to spread
rumor, lies, innuendo, and falsehoods. All to
an adoring crowd of followers too ignorant
to realize that he was using them for his own
benefit. Hence like many a carpetbagger of
yore - he came, he went, and he left assuming
that they had no idea that he had robbed them
of their dignity. The question is will they ever
realize that he cares little about them. And only
about himself? Are Montanans that dumb? 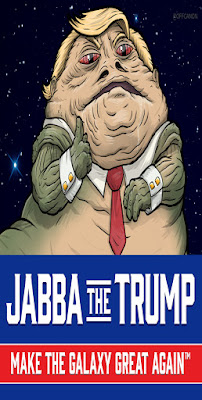 Something evil this way comes
At times it's hard to believe the impact some
idiot from Queens has had on our lives. What
is most disturbing is that there is a deep, dark,
and elusive element of evil to all of this. An
ominous force akin to Darth Vader's devilish
doings. Leaving us to be forced to reckon with
the ruinous results of Mr. Trump's evil empire.
But what am I complaining about?! After all,
given all of the smiles and applause coming
from the stands in Great Falls - the majority
of my friends and neighbors seem to assume
that said blonde bombshell is in fact making
American great again. So why can't I see that?! 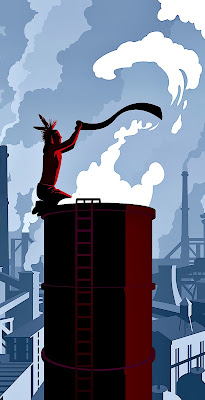 Smoke and mirrors
Somehow I feel as if our world as we know
it is teetering on the brink of extinction. A
tenuous situation at best, at any point we may
lose it all because of the ignorance of others.
Leaving at least this writer to stand alone on
the sidelines and watch the never ending freak
show. The outcome of which I've no idea will
be, yet somehow know it will take decades to
right it's wrongs. And suddenly, a poisonous
anger rises up within me. Hostile resentment
for those who put us in this position. The folks
who voted for change and unleashed a tsunami
of evil. No wonder I feel uneasy if not queasy? 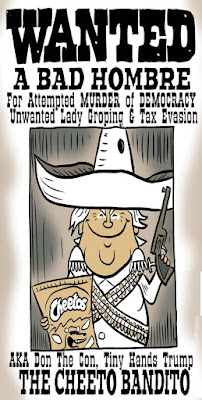 Enemy of the state
Sadly somebody who has nothing to do with
the state of Montana has driven us to a bad
place. One where I can no longer look at my
former friends and neighbors in the same
light. That's because any one who empowers,
lauds, supports, or enables Donald Trump is
in essence my enemy. If that seems harsh, so
be it. That's because this isn't about politics,
but rather all about moral integrity. A battle
between right and oh... oh... so wrong. All of
which has caused my heart to be filled with a
subtle form of hostility. One that bubbles and
burns deep within. Which is what HE wants. He's the bomb
You see, there is a method to his madness.
Which is to pit us against each other and
create a schism so deep we'll never come
together again. "Us" versus "them" means
only one side can win. And if Mr. Trump
has his way - it will be his. The question
is whether Montanans will blindly follow
his lead? Will they realize that he has no
intention of fulfilling any of their hopes or
dreams? Donald Trump has one agenda -
win his battle of self aggrandizement at
all costs. And sadly many of my fellow
Montanans are willing to give him just that... 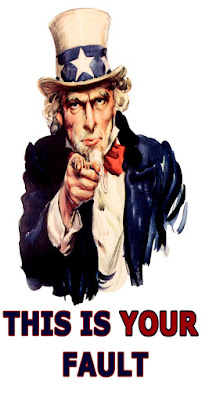 The end is near
Everyday I hope that America and my Montana
friends and neighbors will come to their senses.
And that karma will finally enact her wrath on
all who sully the core of our democracy. Will
we allow Mr. Trump to put his chosen chump
on the Supreme Court? Are we willing to give
up rights that we now take for granted? When
will choice be a liberal vestige of times past? Is
it possible that equality with be vanquished for
all but a few? These and more are the reasons
why I can't abide my Trump supporting peers.
They are destroying America. And so we must
get out and vote this November. End it NOW!
Posted by montanaroue at 4:00 AM