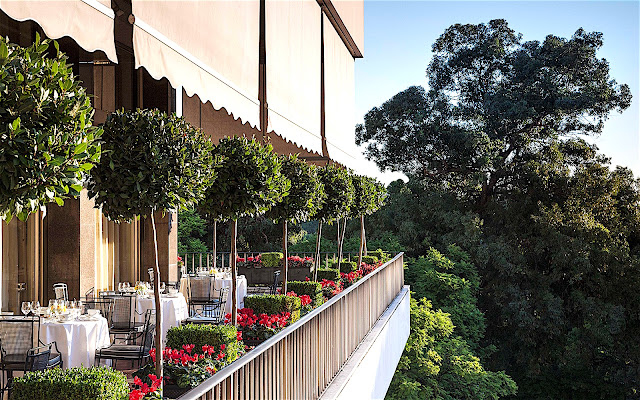 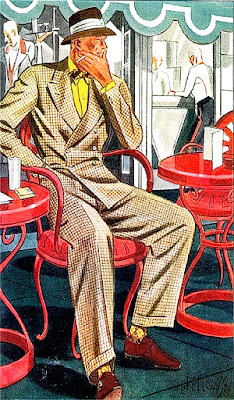 Putting on the Ritz
This afternoon we decided to indulge
ourselves. So we strolled over to the
Lisbon Four Seasons Ritz Hotel. Soon
we were ensconced on a shady terrace
over looking the leafy expanse of the
Parque Eduardo IV. Far above it all,
one could feel flush with pride given
the ticket of entry is an eighteen euro
cocktail. However both of us suddenly
felt like we could have been anywhere.
Our perception of this posh reality was
in fact rather disappointing. Ultimately
boding the question, "is that all there is?" 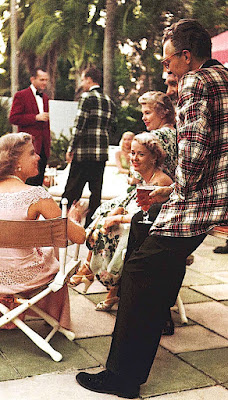 Strangers in paradise
Shortly after our arrival three well dressed
American couples sat at the table adjacent.
Designer accoutrements aside, they could
have been affluent assholes from just about
anywhere. Once they had settled in drinks
were ordered with lots of ice, nuts, olives,
ad potato chips. Yes, the ugly Americans
had finally arrived! However in truth they
weren't all that offensive. What was saddest
is that it really didn't matter where they were.
Could be Lisbon or back in Winston Salem
on the terrace of their club. Wherever they
were, their world revolved around THEM. 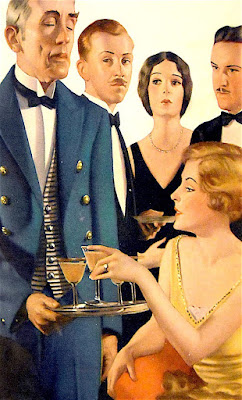 Home away from home
One couldn't help but overhear their chit
chat. Obviously in such an innocuous yet
comfortable setting, they felt perfectly at
ease. I couldn't help but be reminded of
why I had long ago rejected said lifestyle.
Living within an upper middle bubble is
not only stifling, it will bore you to death.
The resulting myopia is beyond bourgeois.
And in my opinion it's simply not worth
the bother. Yet why do many travel the
world only to end up in places that simply
remind them of home?  Can't they stretch
their borders beyond their comfort zones? 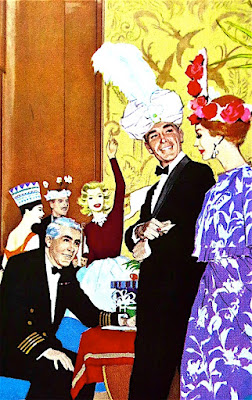 Bon voyage?
As we were planning this trip, Frank and
I considered taking a transatlantic cruise
from New York to Lisbon. Dear friends
of ours had recently taken an extended
voyage to the south of France and had a
lovely time. Therefore in theory nothing
would be as decadent as several weeks
at sea doing absolutely NOTHING. We
looked at all of the top tier luxury cruise
lines. Reading brochures and surfing the
web they seemed quite posh. Yet we both
felt that something  was "off." and in the
end resisted temptation, flying instead. 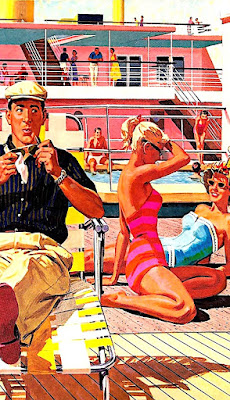 Motley crew
Meanwhile back to the Ritz we listened
as our neighbors y'alled their guts out
only to realize that they were actually
sailors on leave. Traveling en masse has
never held much appeal to either of us.
The idea of being trapped at sea with that
bunch of Babbits only confirmed that we
had made the right decision. Imagine the
two of us upon a luxury liner filled with
a contingency of card carrying country
club conservatives? Talk about fish out
of water! Instead we've traveled under
our own steam to a much better place! 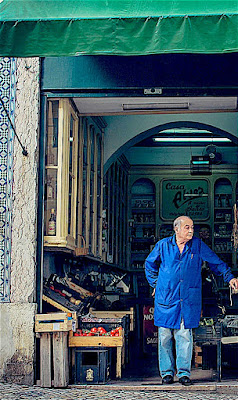 Home alone
Having lived in that provincial milieu, I've
no desire to rejoin such a restricted club.
While obviously tourists ourselves, we've
immersed ourselves in Portuguese culture.
Not only is spending a month someplace
new the ultimate indulgence, we invariably
learn something along the way. Based in an
apartment in the Alfama district of Lisbon
we're living as locals do. Amidst it's narrow
streets even shopping for groceries is more
than a pleasure. Our hope is that by the time
we leave Portugal, it will feel like "home."
After all, isn't home where the heart is?
Posted by montanaroue at 4:00 AM