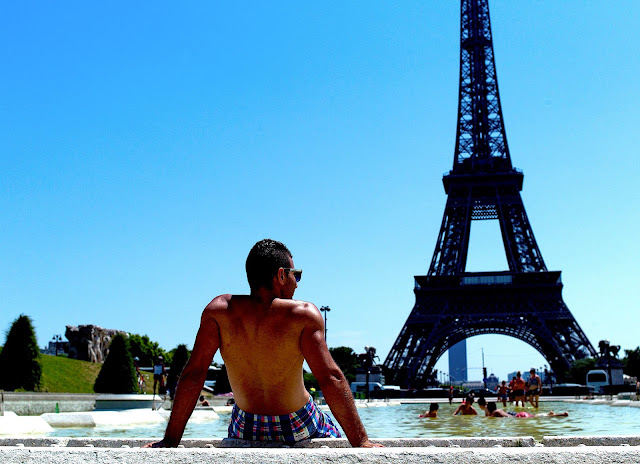 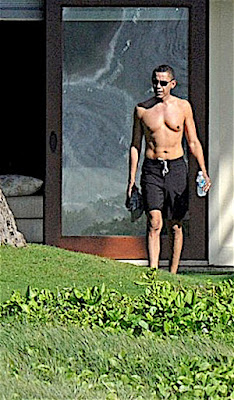 It takes two
If one has been listening to the news from
Paris, it's obvious that terrorists are not our
greatest threat. Whether those far right or
the Koch Brothers are willing to embrace
reality or not - climate experts, scientists,
and politicians from around the globe are
obviously very concerned. What's got them
so hot? Nothing more than a minimum of
two degrees celsius could in theory change
our world dramatically over the next few
decades. So much so that almost everything
that we consider "normal" just might just
go away. Leaving us with one HOT mess. 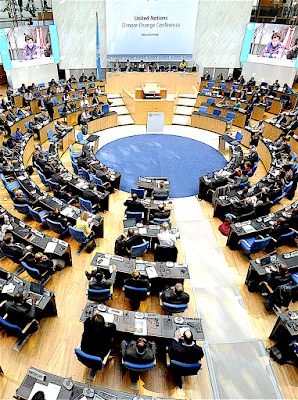 Last but not least
Beyond the beauty of this place that
I call home, I sensed that somehow
there were added benefits to living
in the middle of no where. Well, all
one has to do is look at the charts,
maps, and forecasts coming out of
the Paris Climate Change Summit
to know that Montana may become
the true LAST best place. You see,
beyond flooding and drought, 60%
of our worldwide flora could lose
it's natural habitat. The question is
can we survive on less vs. more?! 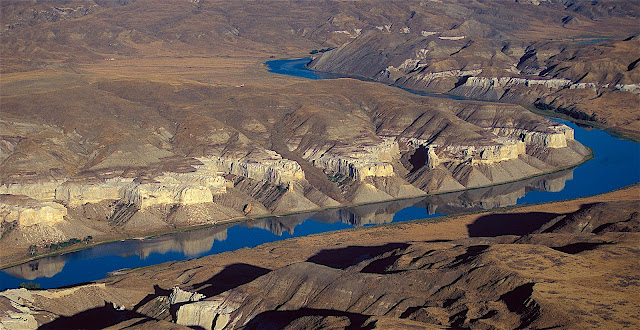 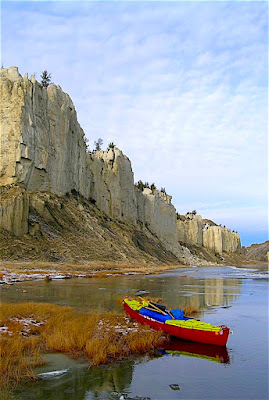 Give me a break
Millions of years ago, most of the land
around here was either semi-tropical or
covered with water.  Today the oceans
are thousands of miles away. And even
if our rivers flooded to new heights it
would fill gaps left by erosion dating
from dinosaur days. Meanwhile we've
seemingly no lack for future water as
we live above the Madison Aquifer
which connects with four others to
create the largest water source in North
America. Meaning that most likely we
can plant our seeds and water them. 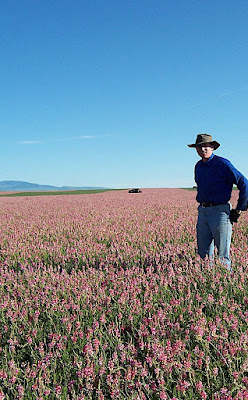 Ready and waiting
Here in Central Montana we're rather
used to living in a harsh ecological
environment. Historically we've been
rather limited as to what we can grow
given said conditions. If things change
chances are our rich soil could easily
support new crops to literally supplant
those lost due to climate change. And
suddenly our limited growing season
could lengthen by several months. All
allowing at least in theory for a major
increase in productivity. Hence for us,
a global crisis could drive real growth! On the edge
Meanwhile Alaska is warming at
double the rate of areas south. It's
frozen soil is thawing and leaving
coastlines vulnerable to erosion.
The island of Shismaref, located
30 miles below the arctic circle is
now losing nine feet of land per
year. Meaning that rather than the
snowbirds flying south for winter,
someday we might all head north
to escape the heat. Maybe it's time
to invest in some inland acreage on
Shismaref for condo development? 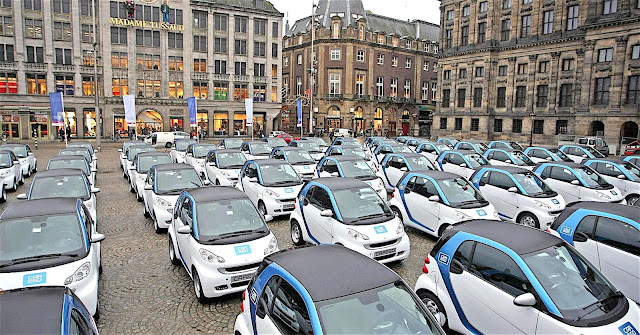 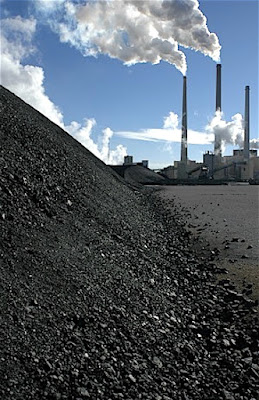 State of emergency
Our problem is what benefits a minority
might destroy other's global habitat. To
avoid such a crisis - every one is going
to have to change how they live. That
means dramatically reducing fossil fuel
consumption and their resulting carbon
emissions. That's not as easy as one may
think it is. In Amsterdam the widespread
use of electric vehicles has reduced city
air and noise pollution. Yet increased
demand for electrical power requires
mega coal burning power plants. Thus
nobody wins the race against time. 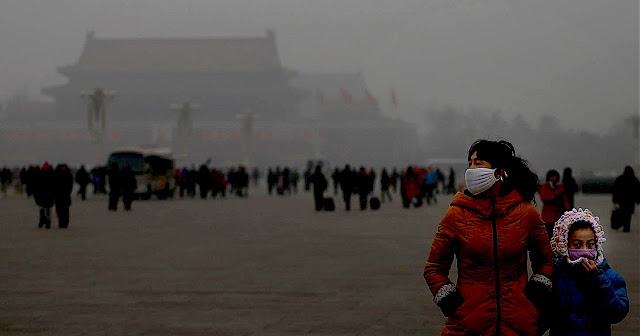 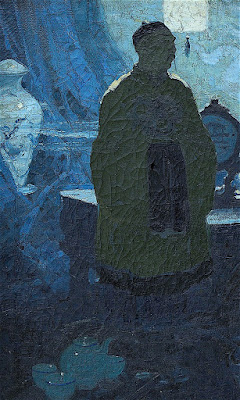 In a fog
In China, a poisonous fog of pollution
has been hovering over Beijing for days.
Said smothering smog is fifteen times
above prior safety limits forcing locals
to stay indoors. What is the cause of
such a venomous vapor? Pretty simple.
Too many vehicles, homes, factories,
and the like uncontrollably belching
sickening smoke. It could be worse -
in northeastern China the industrial
city of Shenyang reported air levels at
forty six times safety limits. Hence my
question is when will they ever STOP? 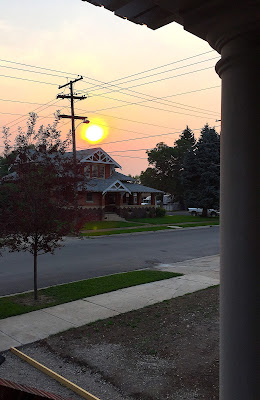 Smoke screen
The truth is we're all in this together.
One only has to experience the impact
of a forest fire in Oregon or Canada on
our local ecosystem. Throughout the
summer our visibility and breathability
is dramatically reduced by such natural
phenomena. Ash resulting from erupting
volcanos across the world have stopped
air travel. Like it or not, other's sins can
wreak rather sinister havoc on even as
pristine a place as Lewistown, Montana.
That alone is reason enough to flip our
collective switch. But will we all do so? 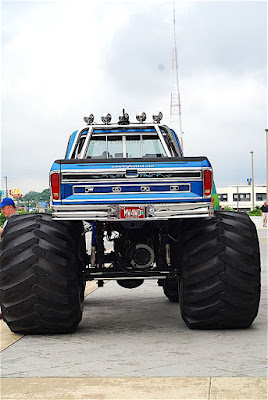 Emergency detour
I'm not sure what this means locally.
Yet my hope is that if nothing else it
will reduce the amount of gas guzzlers
driving up and down Boulevard Street.
Apparently size matters as everyone
seems to feel they must drive a mega
pickup sans muffler even if they rarely
head out of town. Hopefully a shift in
vehicles will free up some hard earned
cash to improve their properties. A bit
of paint and some elbow grease alone
would dramatically improve our local
environment. I know I'd breathe easier! 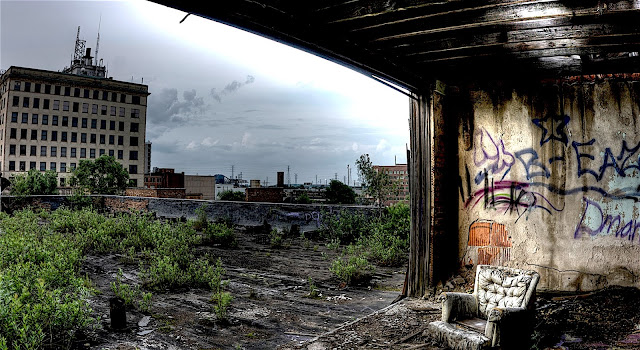 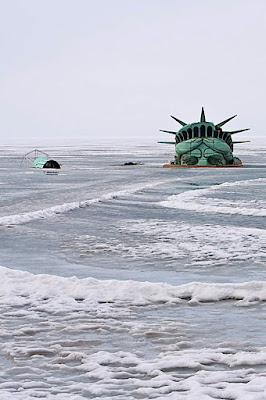 Survival of the fittest
At some point we're all going to have
to embrace reality and then make some
changes. The challenge is how we get
from here... to there. And that's not
going to happen overnight. However
in reality, the biggest offenders are big
business. Hence if industrial powers
simply make some adjustments, we
can all hopefully avoid a global heat
wave. The good news is that humans
can easily adapt to almost any situation.
And hopefully in the end we'll all be
able to live and breath through it...
Posted by montanaroue at 4:00 AM