Doggone it
Today I'm going to try to stay as far from
politics as I can. Yet as my dear friend "T"
suggests, there is still a chance that won't
be the case. All of us evolve as we mature.
Learning bits and pieces along the journey.
Amassing varied experiences which color
our outlook. People, places, and things
combine into a cacophony of not so subtle
influences. The resulting combination
making us who we are today. And a new
collection of bits and pieces that enhance
our tomorrows. Therefore even the oldest
of dogs can learn new tricks. 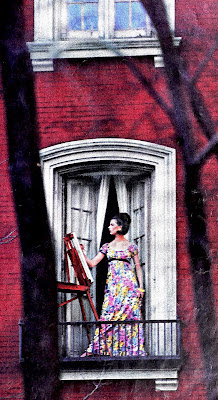 Artistic license
In hindsight my Mother was more open to
new things than I realized. In her late fifties
she picked up a pallet and brush and started
to paint. Post her death, I discovered a cache
of poems written in her late eighties. Both
reflections of her creativity and willingness
to stretch her boundaries. As a child I feared
little more than her wrath. Later as an adult
I loved nothing more than shocking her.
However the greatest element in a surprise
was her ablity to embrace all things new.
Including my beloved Frank who became
Ethel's friend, confidante, and surrogate son.

Hide & seek
All of which demonstrates many who seem
esistant to change are in fact changelings.
Deep within us lies a magical and childlike
ability to alter our reality. To explore and
embrace things we never considered prior.
The end result being a deeper understanding
of our world at large. And for most of us, an
ever growing openness too alternatives. The
only barrier to such growth being ignorance,
fear, and arrogance. Which often manifest
themselves in hate, hostility, and prejudice.
Fueled by those who benefit from deterring
our growth. And maintain the status quo.

Old enough to know better
Fortunately some of us are old enough to know
better. Hence if nothing else the aging process
provides us with the ability to literally connect
life's dots. I don't know about you, but at this
point in life I cannot abide fools. Specifically
those who either lie or repeat falsehoods with
abandon. Given that my time left on this earth
is limited, I'd rather not waste it on deception.
If I've learned anything it is that there are no
easy answers and few absolutes. Hence much
like my mother and others before her - I prefer
to keep an open heart and mind. Which proves
again that mother always had the right answer.
Posted by montanaroue at 4:00 AM