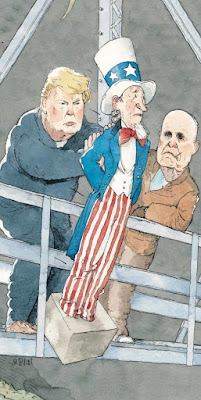 Caught in the act
Few cannot pause and view when passing an
auto accident. Apparently the thrill of carnage
is so alluring that few can resist a sneak peek.
As also is the case when somebody makes a
scene. While such an outburst is embarrassing
it is equally appealing. After all, who wouldn't
stop to indulge in a live theater performance?
Hence the spectacle over the last few days in
Washington has kept many of us in suspense.
While the evidence is shocking, the reactions
of President Trump have been beyond bizarre.
Causing many to think that he's finally lost it.
Or is lost in the fact of being caught in the act. 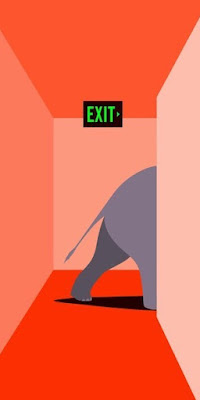 Been there, done that
Karma is if nothing else reciprocal. Therefore
if you push anything or anyone to the extreme
inevitably there is pushback. At times such a
repercussion can be delayed much more than
we might like. However ultimately what goes
around, comes around. Which appears to be
what is happening to Donald Trump. Often it
only takes one victim to unleash a tsunami of
retribution. The end result being judgment
that few if any are capable of escaping. Thus
nasty begets even nastier. Lies morph into
evidence. And those most evil shift from the
dark side to a moral equivalent of a black hole. 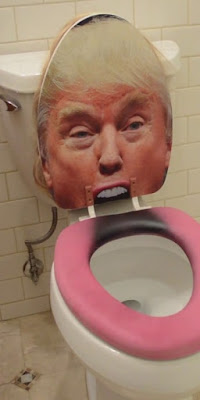 Garbage in... garbage out
Excrement swirls all the more on the way out.
Which may explain why President Trump is
spinning out of control. Like Linda Blair in
the Exorcist he can't control what comes out
of his mouth. Yet his prior defense strategies
seem now ineffective against the truth. Few
if any of his cohorts are willing to discuss the
issue itself. Instead they spread conspiracy
theories based on rumor and innuendo. All
anything but the truth. While said approach
worked in the past, many Americans seem
to be ready to finally face the facts. Which
is that Mr. Trump is NOT up to his role.

Cause and effect
Ultimately the golden rule tends to also be a
prudent precautionary tactic. Hence it makes
sense to treat all others in a positive way that
benefits involved. No wonder abused victims
ultimately turn on their aggressor. Or that one
can only push the envelope for so long before
it finally returns to sender. Anybody can drive
everyone else out of their way. Only to find
they're left behind to face the consequences
Finally rules can only be bent so far until they
are rebound in full force. Thus Donald Trump
is now faced with a crisis of his own making.
And trust me it couldn't happen to a nicer guy.
Posted by montanaroue at 4:00 AM