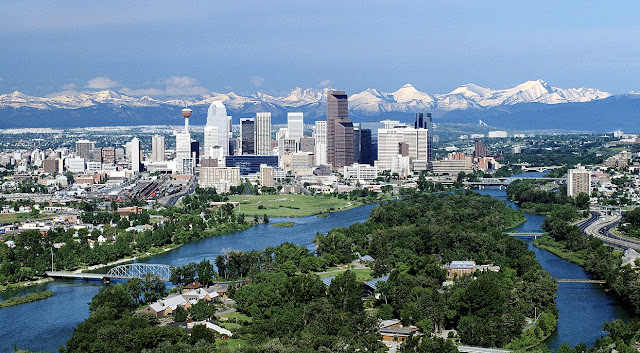 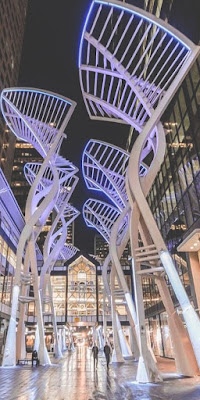 Northern exposure
For the past few days we've spent some time
in reality. Calgary Alberta is not a large city.
Nor is it situated in the most ideal of locales.
Driving up from Montana one passes farms,
ranches, and broad expanses of nothing. All
of a sudden out of nothing arises a metropolis.
One that is constantly evolving while it grows.
Yet even for two city boys like ourselves, it
offers much more. Beyond "civilization" said
immersion reminds us that the life we lead in
central Montana is anything but ordinary. And
while Lewistown is gloriously unique, isolated,
and lovely - life there can also be delusional. 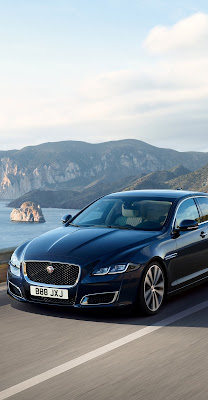 Two for the road
Consider the reason for our journey. In order to
service our Jaguar we must drive six and a half
hours to our nearest dealer - Calgary. Obviously
driving about Montana in such a luxury vehicle
is a rarity (versus the local requisite pickup). In
fact it's probably crazy. However post arrival
in Calgary we affirmed that we are anything but
nuts. And that many others drive all the more
decadent vehicles. Local dealerships including
Masseratti, Lamborghini, Tesla, Rolls Royce,
Aston Martin, and Bentley line the byways. As
do requisite luxury brands like Mercedes Benz,
Lexus, Jaguar, and the like. Safety in numbers! 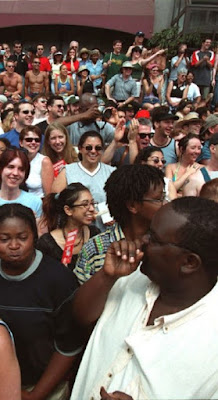 All together now
The first thing that pops out is the diversity
of Canada's third largest city. Per the data
over thirty percent of its population is part
of a "visible minority group". Add to that
another almost 3% deemed "aboriginal".
Thus Calgary's white population hovers at
67%. Not surprising when compared to our
former home - the borough of Manhattan's
percentage of white residents is around the
same. However the entire city of New York
white resident percentage sits at 44%. The
total U.S. white population average being
72.4%. As Lewistown tallies in at 94.24%.

Land of the free?
All of the above explains why some Americans
are afraid of losing their majority. The hatred
and prejudice of white supremacy is fueled by
fear. And greed. Any unwanted competition
simply makes things harder for those used to
being in control. Hence some want to keep the
American dream all for ourselves. Rather than
share it with those who need it most. A desire
that is not only myopic but incredibly selfish.
The antithesis of what makes America great.
Our melting pot has fueled our success. So
why not mix it up? Experiencing something
new is inevitably a most supreme experience.

Smart?
Back in Calgary, the second most impactful
difference is how people dress. Downtown
is filled with handsome young men in tight
fitting suits, fancy shoes, and novelty socks.
The ladies garbed in requisite modern black
with high heels, trophy handbags, and all
related accoutrements. While the majority
here in the city, they would be rare sights
indeed back in Montana. Hence we have
enjoyed seeing people who obviously put
time and effort into their appearance. Rather
than throw on sweats, boots, and a baseball
cap. Why can't everybody look their best? 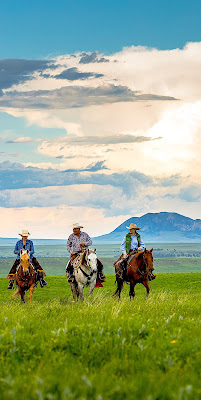 Food for thought
Finally as previously shared we over-indulged
in culinary pursuits while in Calgary. Not the
most "foodie" of cities it still offers an array of
eateries. Including a plethora of ethnic options.
Enabling these two former urbanites to indulge
in what historically for us was everyday fare.
Proof that you don't  understand all that you're
blessed to have until it's gone. Which is why
we can't wait to get home. All of the above has
been stimulating yet we both crave the simpler
life. Hence while not as stimulating, inspiring,
or dazzling - Lewistown Montana is and will
always be where our hearts are.
Posted by montanaroue at 4:00 AM