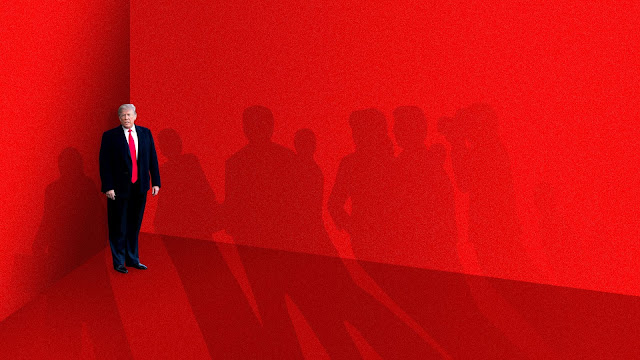 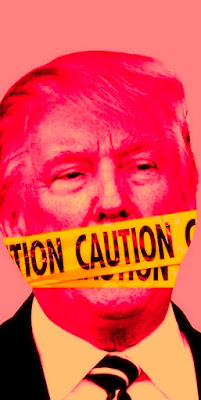 More or less?
Some people have to push the envelope. Live
life on the edge. Test and stretch every limit.
And gamble it all no matter the consequences.
Megalomaniacs by their nature are masters of
extremes. Self consumed they assume nobody
knows better than them. Given the opportunity
their sense of omnipotence only increases. In
their minds they can do no wrong. Thus even
when they know exactly what they've done,
they assume they can escape all consequences.
Then suddenly, like any ruse it all falls apart.
And only then are they forced to face facts.
The good, the bad, and the ugly truth. 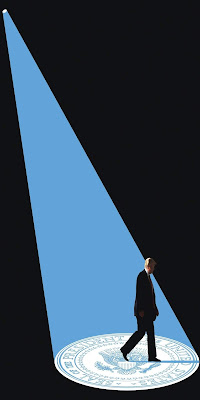 Winner takes all?
Donald Trump takes pride in the delusion that
he always win. Hence when faced with failure,
he shifts to a state of denial. Which is exactly
where he's been since initiating his candidacy,
running a questionable campaign, winning the
electoral college, and moving into the White
House. Against all odds he's deftly survived.
Maintaining a foothold no matter the evidence,
accusations, or facts exposed. Winning even if
the odds are against you makes one susceptible
to super hero syndrome. Causing one to think
they're invincible, untouchable. Thus Trump
takes greater risks as he assumes he can't lose. 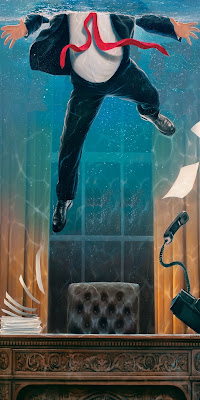 Sink or swim?
Such not so passive and all too aggressive
behavior may work on a reality television show.
However when said never ending drama occurs
on the world's stage, karma awaits in the wings.
Thus it was only a matter of time before Mr.
Trump was caught in the act. Yesterday what
goes around came around. And the spinning is
ust beginning. Sucked into a vortex of his own
making, the gentleman in question may for the
first time be left without all the answers. All
because he has finally met his match - the law
of this land. And just possibly, he'll be forced
to finally learn his lesson.

Encore performance?
Then again he could "win" once more. If nothing
else Donald Trump is resilient. Therefore when
his real estate and casino empire hit hard times
he reinvented himself. Creating a "brand" all his
own. Subsequently building a world made up of
smoke and mirrors. Will the emperor's new togs
finally be exposed for what they are? Nothing
but rumor, lies, and innuendo. Or will the facts
speak for themselves? Revealing a man so vile
he can't survive fact based scrutiny. Then again
he's been through worse. And like some vampire
he'll arise again from the dead thirsty for blood.
Ready to wreak vengeance on all in his way...
Posted by montanaroue at 4:00 AM