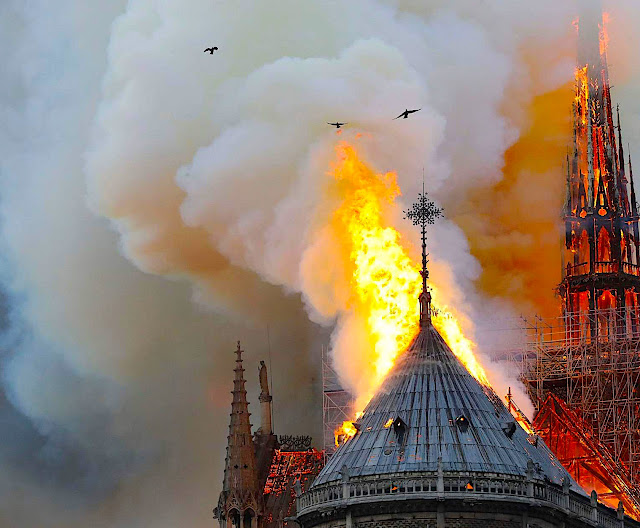 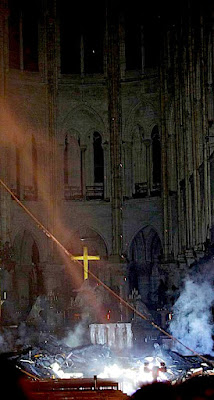 Le coeur de la France
As dusk fell yesterday in Paris - Notre Dame
burned. Not only an iconic house of worship
dating to the eleventh century, it is a symbol
of all things French. An icon of Paris which
through the centuries has survived invasion,
revolution, war, and Adolf Hitler. As Frank
and I watched the horrific fire via television
we both shed a tear. In part because some of
our fondest times have been spent in the city
of lights. Hence we mourned along with the
rest of the world for the citizens of France.
Who yesterday lost a symbol which in the
end will hopefully rise again from its ashes. 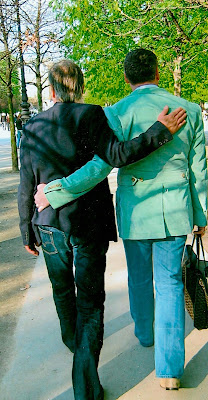 Amour perdu
The first time I saw Paris I was both young
and gay. Equally as trite, it was a brief week
in April. The city was abloom in all it's glory.
Breathtaking in all ways. Equally impressive
was both the innate elegance of Parisians and
their overt disdain for all except their fellow
Frenchmen. And yet Frank and I always had
a wonderful time in said urban mega of chic.
Relishing its bourgeois panache, decadence,
and charm. Any visit which always included
a jaunt around Notre Dame. The touchstone
of Paris. It's foundational core. It's heritage.
It's very essence. The sacred heart of France. 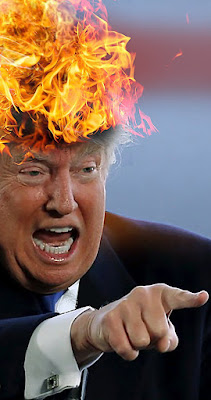 Tempete de merde
Times such as these are sobering. Causing
most reflect on all we've loved and... lost.
Yet as Paris burned, President's Trump's
message grew all the more petty. Racist
slurs against a U.S. Congresswoman. His
refusal to share taxes as "Democrats are
too stupid to understand them." And again
attacking Mr. Mueller's investigation prior
to it's release this Thursday. Thus instead
of honoring what Paris has lost, he lost it.
Once again showing us that he is anything
but Presidential. Thus as we mourned the
Notre Dame, America lost its dignity. 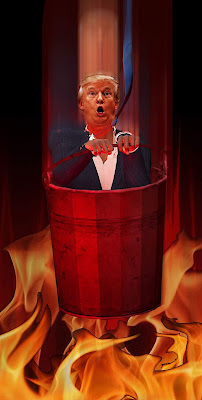 Je ne sais quoi
Once Notre Dame's disastrous fire finally turns
cold, its rebirth will immediately start anew.
All of France understands the importance of
preserving their heritage for future generations.
Yet sadly, even an ally's saddest times we can't
remember that it's not always about us. Here in
the United States we worry what will happen
post Thursday's release of Mr. Mueller's report.
Will it fuel outrage? Or cause the incriminated
to confess their sins against democracy? Or
fan Mr. Trump and his supporter's flames of
outrage? Allowing them to play out their self-
aggrandizement while our democracy burns?
Posted by montanaroue at 4:00 AM