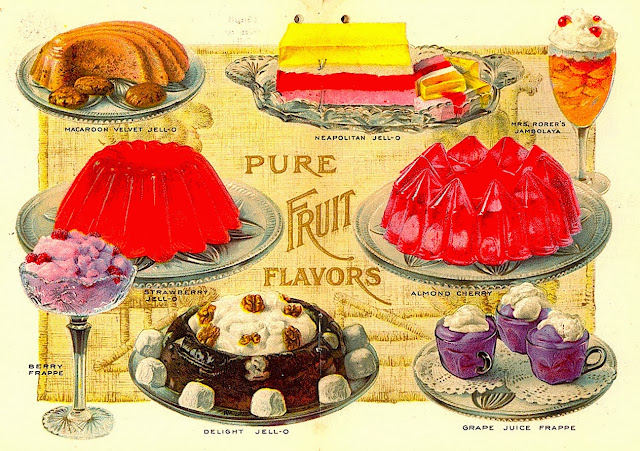 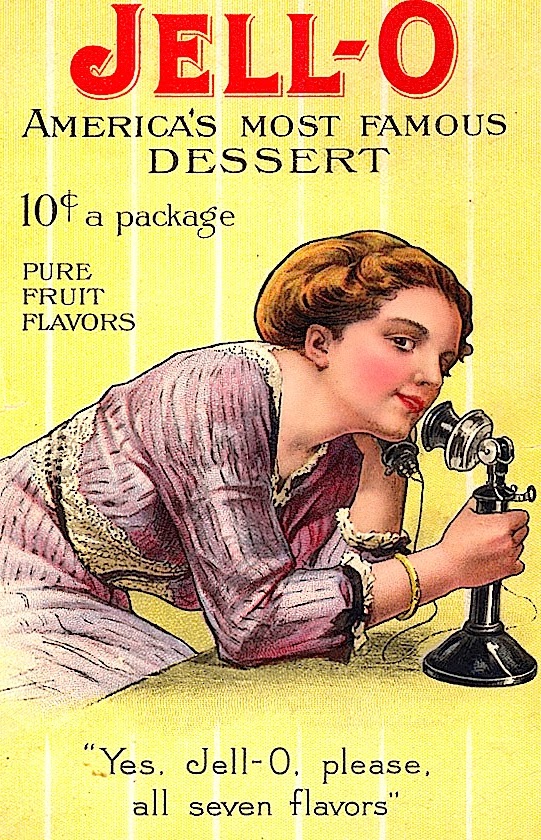 On the brink of extinction
Years ago my youngest "foodie"
daughter "M" posed the question
that entitles today's blog. The topic
of discussion was a "food" of my
youth. That quivering confection
known as Jello. What I find most
odd is that obviously "M" had no
personal recollection of eating any
Jello nor any emotional connection
with the stuff. Given I last ate any
Jello at least ten years ago, why am
I surprised by how incredulous she
was about gem toned gelatin goo? 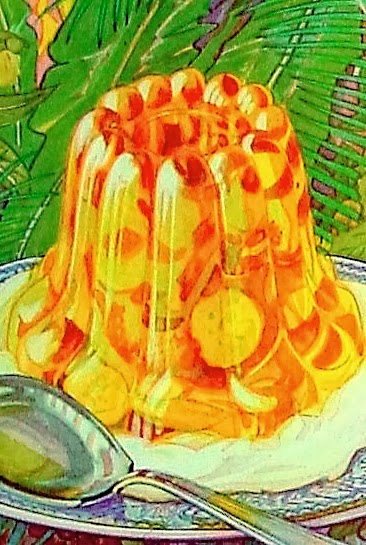 Tower of power
When I was a boy, a dish of Jello was
considered a treat. Even more so when
molded which made it appear festive.
Served only on special occasions, any
important table sported a wobbly, jewel
toned, gelatinous tower. One shouldn't
be surprised as prior to the twentieth
century, any soft of jelled concoction
was reserved for the hoi polloi. It was
not until the turn of the last century that
flavored gelatins became available to
the masses. From then on it was easy
for anybody to be a culinary expert. 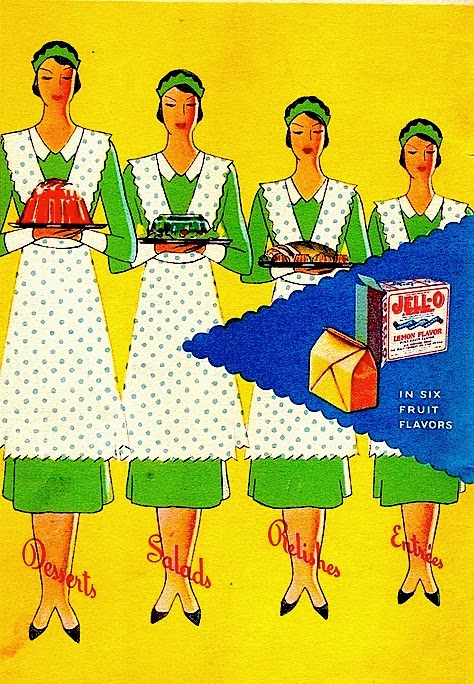 The pause that refreshes
Soon every hostess had her repertoire.
Mother loved to serve the ladies who
lunched molded tomato aspic spiked
with some lemon and Worcestershire.
During summer chilled concoctions
would fill her table until it resembled
a cruise ship buffet. Whoever decided
that left overs seemed more appetizing
if encased in gelatin has fortunately
gone the way of the dinosaurs! Can
you imagine serving canned tuna and
chopped egg floating in lime Jello to
guests today? I doubt it would gel. 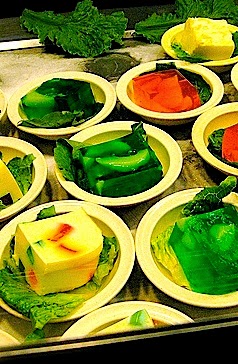 Square meal?
Sometimes there is nothing better than
munching on something that you know
is probably bad for you. At my first job,
our corporate cafeteria served massive
cubes of whipped Jello. For whatever
reason I could not resist ingesting these
frothy concoctions that resembled some
odd science experiment gone wrong.
All while my bestie "T" would sit across
a Formica table from me nibbling on her
organic carob brownie. As she eyed me
with disdain, I rebelliously jiggled with
glee on a sugar high! Shake, rattle, roll! 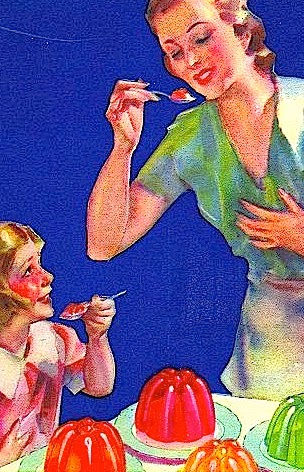 Gone but not forgotten
Our collective passion for Jello seems
to have faded and died along with my
parent's generation. As Dad advanced
into the final stages of Alzheimer's, my
mother shoveled bowls of Jello down
his helpless throat. Somehow Ethel
thought that Howard gained some sort
of nutritional benefit from this mix of
water, gelatin, chemicals, and sugar.
She ran through a box a day until...
they both died. A possible explanation
as to why local Jello consumption has
dropped dramatically? Melt down! 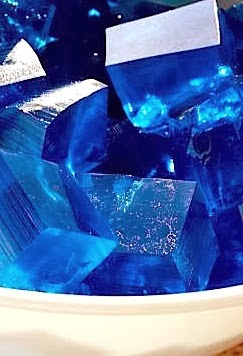 The memory lingers on
As far as I can tell, hospitals are the
only establishments that still serve
Jello. Therefore most only think of it
when we're ill. Recently an associate
had oral surgery. Limited to liquids,
she rediscovered Jello and found it
quite tasty, especially the blueberry
variety. After indulging, she looked
in the mirror. To her chagrin, her lips
were now bright blue. Indication that
whatever is in Jello, it's not natural.
Proof that what may taste good, may
not always be very good for you.
Posted by montanaroue at 4:00 AM