BLEST BE THE TIE THAT BINDS

Roadside attraction
I've spent this week down in West Virginia.
While not all that far from Manhattan, it's
another world entirely. However the biggest
difference seems to it's southernly exposure.
Things are obviously slightly warmer here
as evidenced by the fact that it's greener.
Unlike New York there is no snow on the
ground. And while it's definitely not time
to don one's shorts, it feels like spring is
imminent. Especially given sunny clumps
of naturalized daffodils are blooming along
the highway. And said bright spots spring to
mind two women near and dear to my heart. 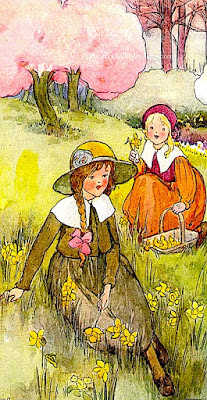 Southern exposure
For many reasons my mother loathed the city.
While she appreciated all of it's benefits, Ethel
hated the congestion, crowds, dirt, and other
aspects of urban life. Post Dad's retirement
they moved south to Virginia. Far below the
Mason Dixon line she reveled in her version
of nirvana. And like it's neighbor to the west,
Virginia blossomed earlier than up north. The
result being an riotous explosion of dogwood,
redbuds, magnolias, rhododendron, and azalea.
And of course tulips, hyacinth, narcissi, and
daffodils. All of which bloomed week after
week due to the temperate climate. 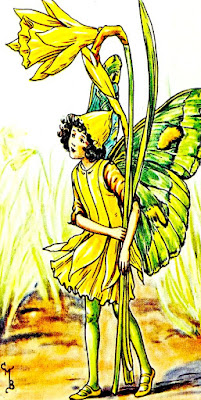 Twice as nice
Upon the birth of her first grand daughter on
March 26th - Mother traveled north with an
armful of daffodils plucked from her garden.
From then on said blossoms symbolized one
of life's gifts - my daughter "E." For many
years thereafter Mother sent a box of home
grown yellow beauties for "E's" birthday.
Thus whenever I see said posies I think of
both my mother and her beloved first grand
baby. From day one they shared an intense
and intimate bond. Which at times could be
tested given both ladies were VERY strong
women - i.e. two of a kind. WATCH OUT! 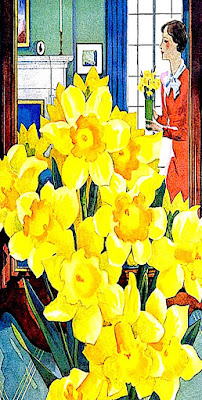 As memory recalls
A child of divorced parents - Ethel grew up
in her Grandmother's home. Hence Mother
understood the role grandparents can play
in a child's development. Recently a distant
cousin reached out via ancestry.com. His
uncle was my great grandmother's nephew.
While attending art school in Manhattan
during the early thirties he frequently dined
at his Aunt Sadie's home. For the rest of his
life he recounted tales of the formality and
elegance there within. And suddenly I had
a deeper understanding of my Mother. And
confirmation of why she was who she was. 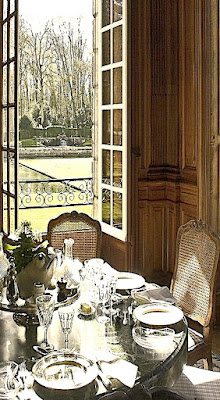 Hand me downs
Ethel was raised in a world defined by a
distinct set of rules. Manners and decorum
were always of upmost importance. These
strict guidelines defined the way she (and
laster we) lived. Said elegance was natural.
Never forced nor awkward. Subsequently
I've carried on her traditions which in these
modern times might be considered archaic.
Yet using linen napkins or placing catsup
in a proper receptacle is the only way that
I can live. Proof that who we are is the end
result of a long series of multi-generational
traditions. Talk about the ultimate set up... 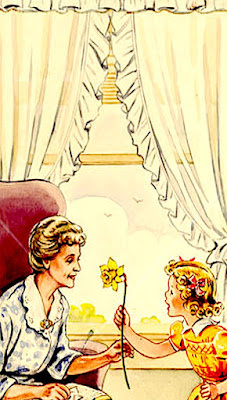 Equal opportunity
In many ways "E" is her father's daughter.
However for many reasons she plays by her
own set of rules rather than mine. I can see
elements of my Mother in my eldest child.
Much like Ethel, "E" loves a bargain. She
also aggressively rules her roost yet is able
to embrace her spouse's counsel as needed.
Most important she fiercely loves my dear
grand daughter and thus will do anything to
protect her. Such devotion is the greatest of
gifts any parent can give to their child. As
the offspring of one great lady - I'm happy
to see my mother's legacy live on in "E." 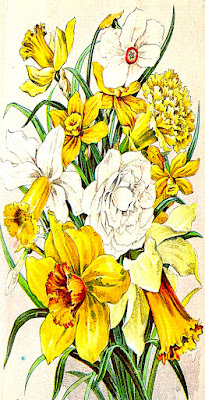 Blossom time
Now a grandparent, I wonder what element
of my history will be passed on to the next
generation. Last summer my grand daughter
"M" came to visit. Staying in our home was
a new experience to her. At times we butted
heads over my "house rules," However I'm
certain said foray was a life-changing trip.
Monday my youngest grandson arrives for
a week. Not yet two, my hope is that while
together we'll create some memories. After
all, it's the little things in life that make the
difference. Thus if nothing else our love is
passed on... and on... and on... and... on...
Posted by montanaroue at 4:00 AM