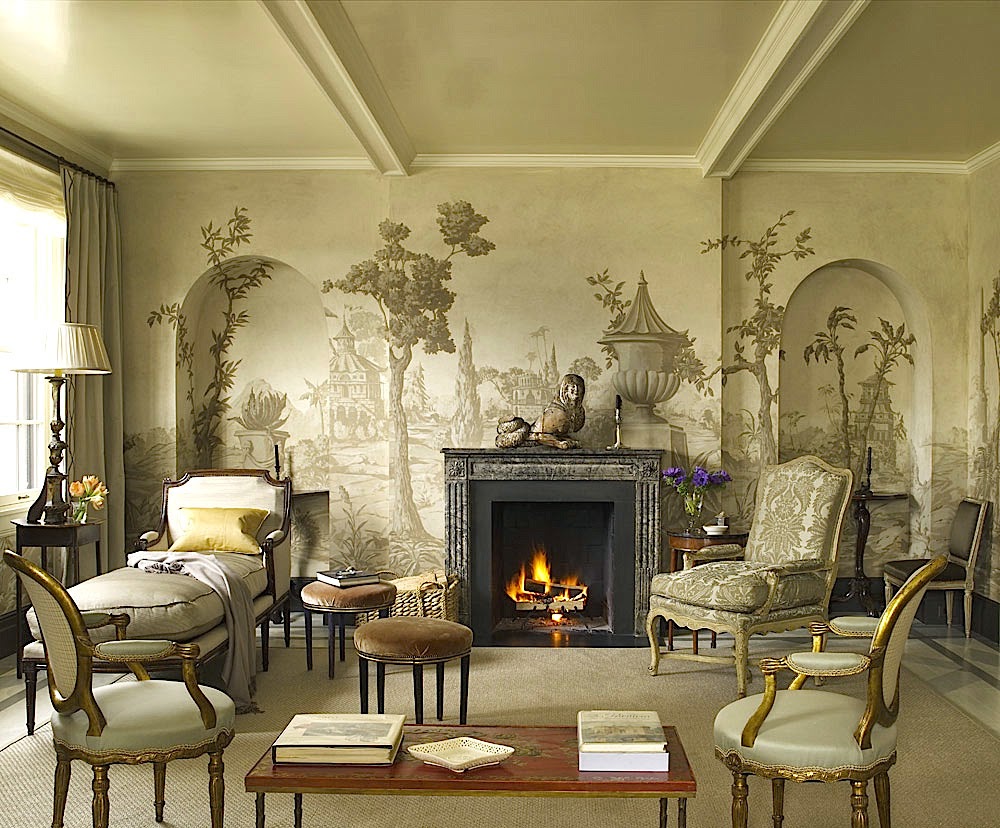 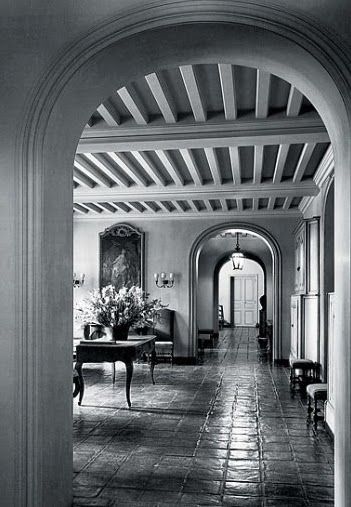 Amour toujours
While we live in a technicolor world,
I prefer the more subtle tones of film
noir. Moody monochromatic hues are
so much more inspiring than rainbow
brights. Years ago I was able to visit
the Lasker house designed by David
Adler. A masterpiece now surrounded
by a subdivision, one could still find
vestiges of the original Francis Elkins
interiors. One of which was the most
amazing chocolate brown antique wall
paper... it was love at first sight. Yet it
wasn't my first. Been there done that! 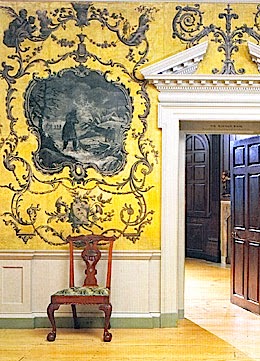 Manor born
Since a tiny tot I'd adored the Great
Hall from the Van Rensselaer house
now in the American Galleries at the
Metropolitan Museum of Art. Stevan
Van Rensselaer II built his home on
a five hundred thousand acre estate
outside of Albany New York from
1765 through 1769. No expense was
spared as these blatant displays of
wealth inspired by the paintings of
Gian Paolo Pannini and printed in
England demonstrate. They're still
just as chic as when first hung. 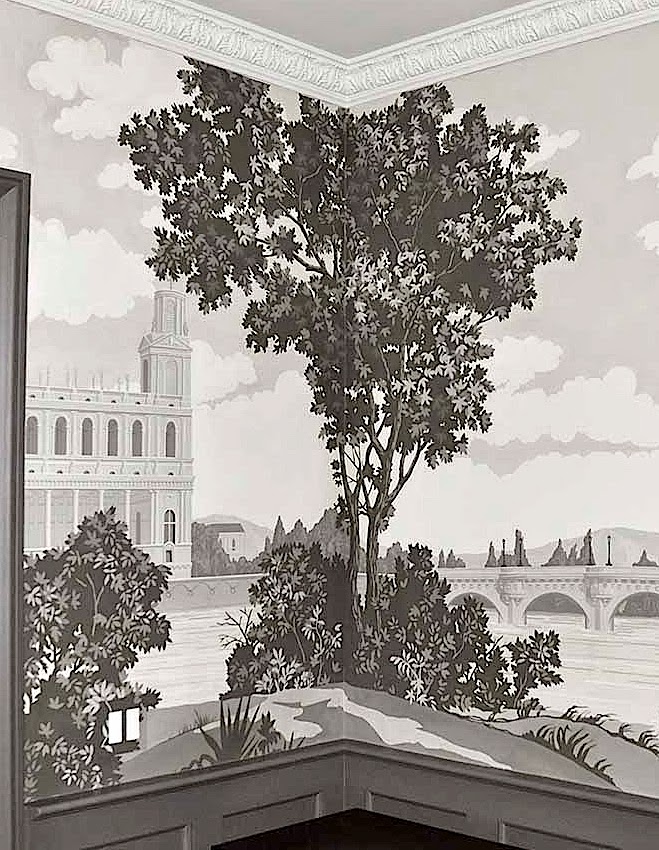 Shades of grey
Grisaille, the monochromatic
painting technique has been
used since the twelfth century.
Long before the camera, these
images showed the world in
black and white. By the mid
eighteenth century, wallpaper
manufacturers created grisaille
murals. Since then, anybody
(with money) could be chic in
an instant! I've long wanted a
grisaille room of my own. Now
is the right time and place. 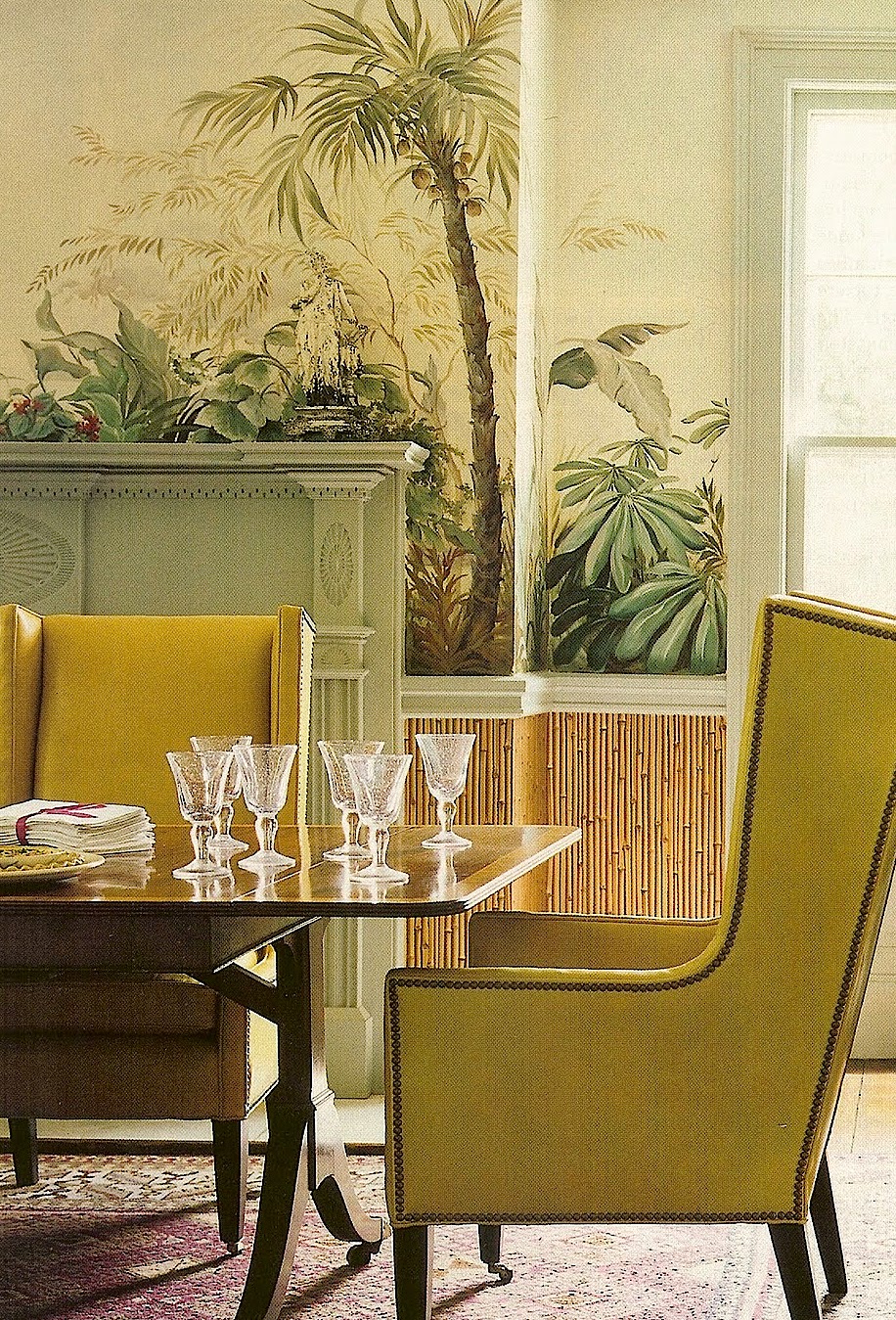 Back to the future
The Passion Pit interior elements are heavily influenced by the colonial revival. Therefore I felt that our dining room was the perfect spot to GO GRISAILLE. My issue is I did not want it to appear "period." We want our home to be a fresh and modern take on historic references. Scouring what was available from firms like Zuber and De Gournay, everything seemed just a little too stuffy. Given the room is in Montana not Manhattan, it needed to be a bit bolder, rougher, wilder... 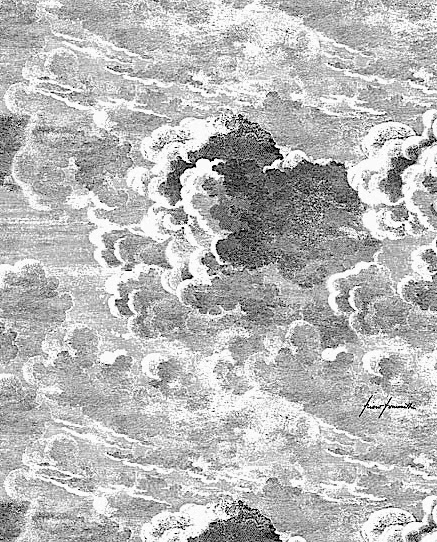 Cloudy forecast
Finally I found it... almost.
Cole & Sons sells a Fornasetti
cloud mural. Piero Fornasetti
was an Italian designer who
hit his apex in the sixties. His
witty use of eighteenth century
black and white engravings is
once again terribly chic. While
I love the paper, it feels a touch
stodgy and gloomy. One thing
I knew, I had to have clouds as
I now live in Big Sky Country!
But who, what, where, how? 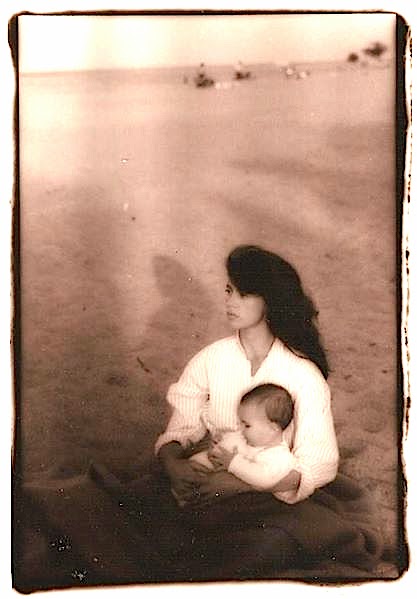 Weather woman
This weekend my best friend Tina
arrived in rural Montana. This isn't
her first time at the rodeo however
she's not here to have fun! Rather,
she's about to start working on a
grisaille mural in our dining room.
For months we've been chatting and
planning until finally, it's time to put
up or shut up! Even though today is
her birthday, she's hard at work! In
my opinion one of the most talented
artists around, she's willing to do this
for us because... she had no choice... 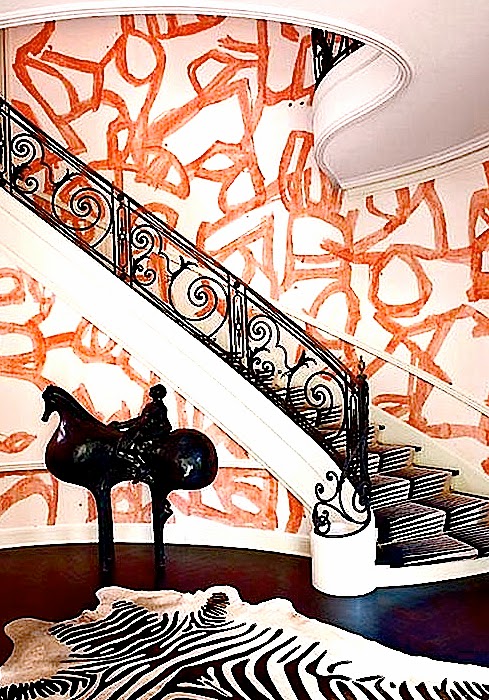 Out of the box
We've handed Tish a blank slate in
the form of a white room. Inspired
by the Fornasetti wallpaper, she'll
now create an homage to Big Sky
Country via a mural of big clouds
above our wainscot. This will be a
modern take on classic grisaille.
Think Kelly Wearstler meets Piero
Fornasetti meets Zuber. Think sepia
mixed with grey plus a tiny touch of
turquoise with bits of gold and silver
leaf. She's here for two weeks and
I can't wait to see the end result.


Tune in for an update soon!
Posted by montanaroue at 4:00 AM