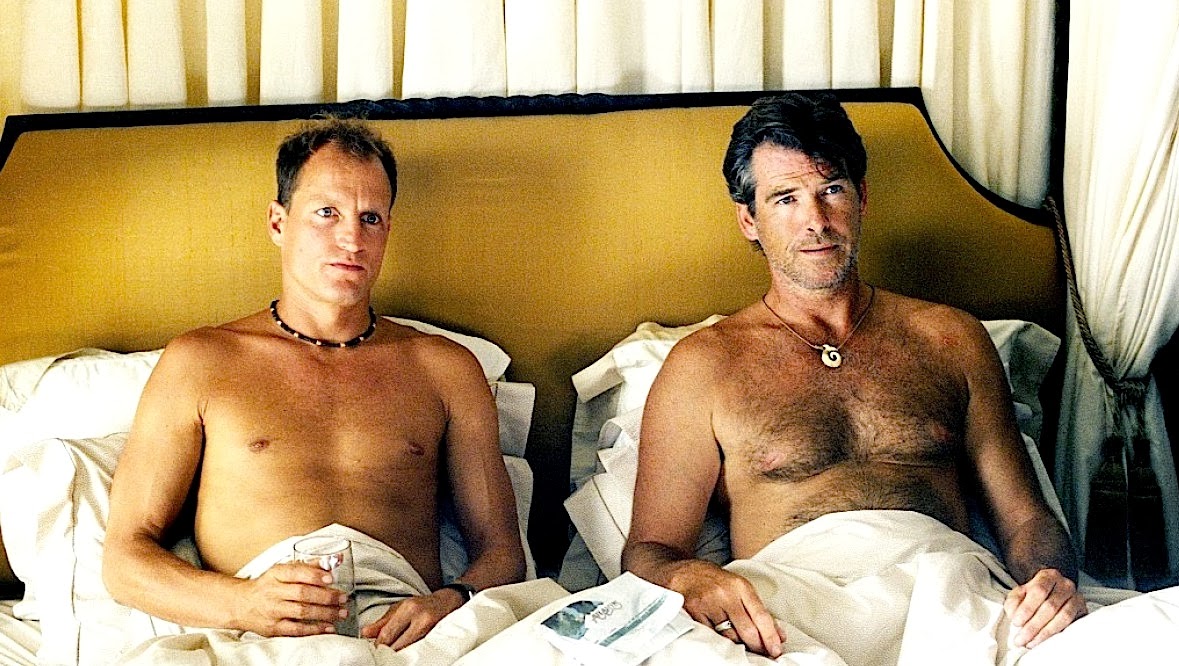 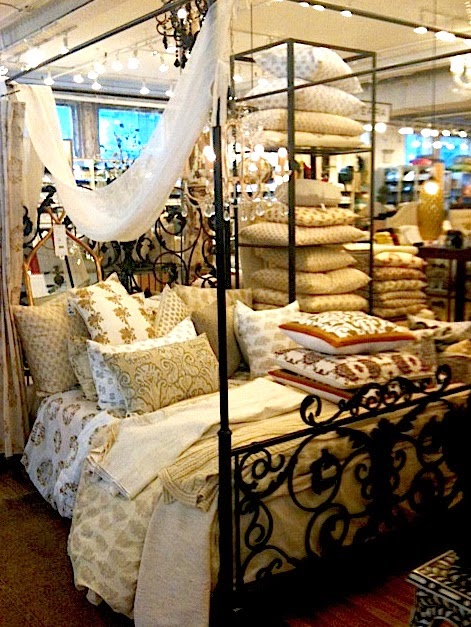 Odd men out
The other day Frank and I stopped
by our favorite home emporium.
We wandered all six floors looking
for anything that caught our fancy.
Fortunately for our wallets, nothing
seemed fresh, new, or even faintly
enticing. As we prepare to combine
the contents of multiple residences
into one, we truly lack for nothing.
We can easily shop our storage unit
and boxes for all sorts of amazing
accoutrements. Will it be enough
for this pair of homo homaholics? 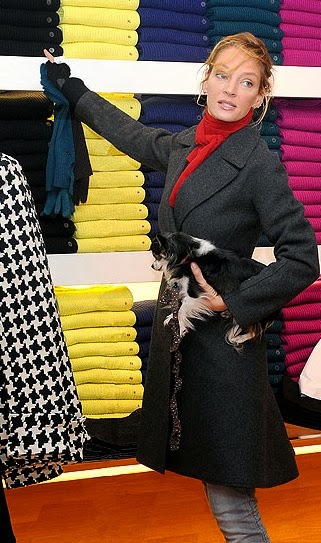 Been there, done that
As usual, we ended up in linens. While
surrounded by the best purveyors of all
things bed, we struggled to discover
something NEW. Our last surprise in
that particular shop was when Frank
realized Uma Thurman was reaching
for the same pillow he was! It seems
that even Uma was searching for NEW.
As I recall, since then we haven't seen
anything as exciting in linens. Actually
that's not true. There is one new trend
in the bedding arena... OLD. And we
absolutely loathe it. More on that, later. 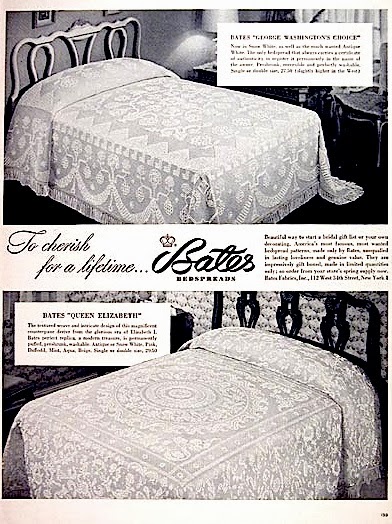 What a spread
Growing up making the bed was
easy. Ethel liked her sheets crisp
with perfectly folded corners. On
top was a woolen blanket which
was covered by a "bedspread".
Being addicted to early American
decor, Mother preferred a candle
wicked Bates Washington to soft
chenille. What could be easier?
All you had to do was place the
woven mass over your bed. Fold
down the top, position pillows,
flip the flap, and voila, finis! I slept with Bill Blass
My childhood pillow was latex foam
and still to this day, I prefer a mass
of solid rubber versus fluffy feathers.
I recall the first time I saw "designer
sheets". In the seventies we all went
mad for those boldly patterned no
iron percale extravaganzas. Initially
mine matched my bedroom decor of
eagles, fifes, and drums. Later on I
upgraded to a sleek, modern set from
Mr. Bill Blass. It all seemed so chic,
who knew that soon every bedroom
would be from a bed in the bag? 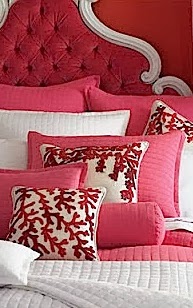 Comfort and joy?
Later on we all started to a layer it on.
Comforters, feather beds, throws, and
seemingly thousands of pillows. Since
then I think I've spent the bulk of my
existence removing and returning
(according to a carefully prescribed
formula) said pillows every evening
and morn. When, where, and how did
we get so fussy? And honestly, does
anybody ever use more than one or two
pillows? There's a reason the others are
called "decorative", the only purpose
they serve is to sit there and look pretty. 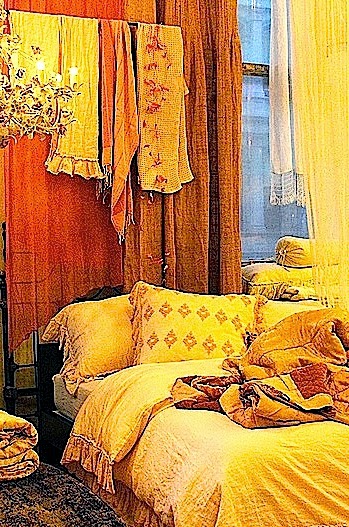 Stop, drop, roll
Back to our shopping spree. Apparently
the latest trend is anything rumpled or
wrinkled. I don't know what else to call
it except MESSY. Bed after display bed
was covered with linens that to my eye
looked like a horde of peasants had just
awakened and arose from said beds.
While I'm happy that the Belgian linen
weaving industry has apparently been
revived, I don't like the idea of sleeping
in a feed sack. Initially we tried to like
these muted masses. Yet post purchase
of an ensemble, we quickly returned it. 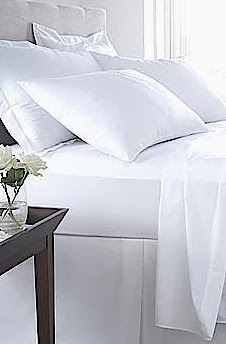 White out
You see, we like our beds crisp and
freshly pressed, not a mess. Try as
we might, we seem to be unable to
embrace any tone beyond white.
The higher the thread count all the
better and the stiffer the starch even
more so. Rather than embrace new,
we seem to be returning to the beds
of our youth. Less is more and gone
are the masses of pillows. We've
slowly edited down and now prefer
to top it all with an elegantly simple
woven coverlet or duvet. 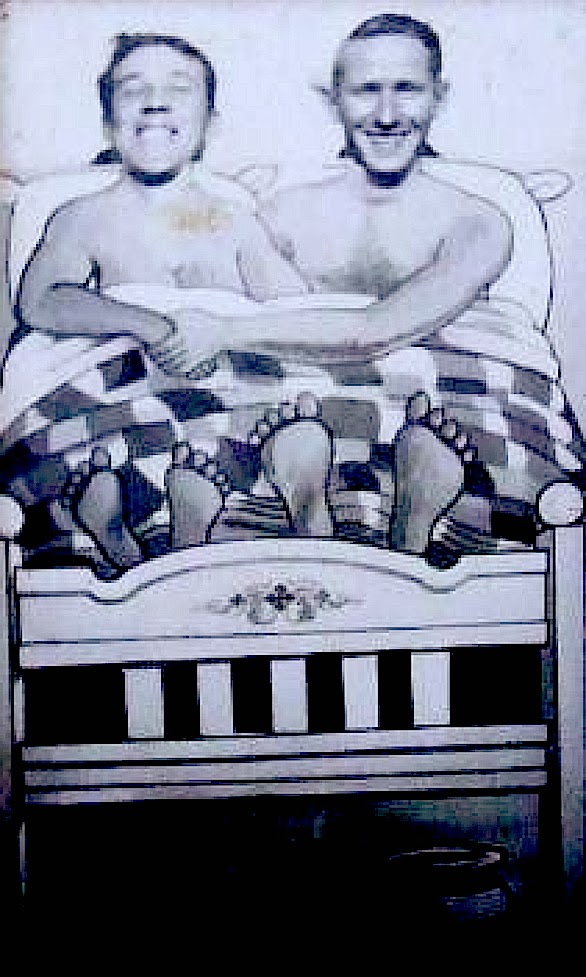 Peas in a pod
I guess in the end it really shouldn't matter
what your bed looks like. More important
is who one shares it with. While sleeping
solo can occasionally be delightful, I love
nothing more than reaching over to find a
warm soul adjacent. When apart, I simply
don't sleep as well as when we're together.
Upon reuniting, that nights sleep feels as
good as a million bucks. Oddly it's just
like I used to feel whenever I visited my
parent's home. For whatever reason,
I slept like a baby in their guest "womb"!
Night night, sweet dreams dear friends!
Posted by montanaroue at 4:00 AM