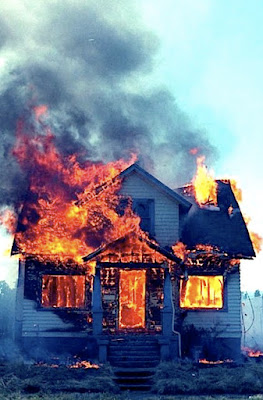 Impromptu performance
A few weeks ago we were spending a
rather lazy afternoon about the house.
Suddenly Frank heard a series of loud
"pops" and looked out the window.
Down the block a neighbor's garage
was ablaze. Rushing out we soon saw
a fire reaching at least thirty feet into
the air as plumes of dark, black, acrid
smoke filled the sky. Within an hour
the fire was out. However it's resulting
damage had rendered said home quite
uninhabitable. Proof that one's life can
change in the strike of a match. 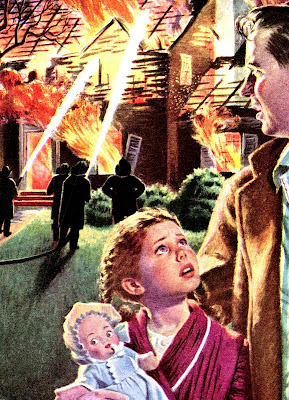 House warming
Years past my bestie "T" threw her
annual New Years Eve dinner party.
Her home was perfectly turned out
as were the guests. Unbeknownst
to the lady of the house whoever
installed the range hood long ago
didn't do their job. Hence once her
caterer put a juicy beef tenderloin
on the indoor grill the residence
was soon aflame. As the snow fell
the guests carried out her dining
table fully set, all running back to
save her many of her treasures. 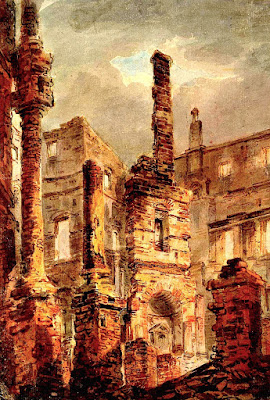 All that remains
Weeks later I visited to see what little
was left. Standing in what had once
been "T's" kitchen, we could now look
three floors up and see the sky. Slowly
"T" rebuilt and restored as she worked
through post conflagration syndrome.
The capricious fire destroyed most of
the kitchen yet left a tea service sitting
perfectly intact on what little was left
of a counter. Smoke on the other hand
had infiltrated every nook and cranny.
Ruining whatever had somehow been
able to escape the flames and water. 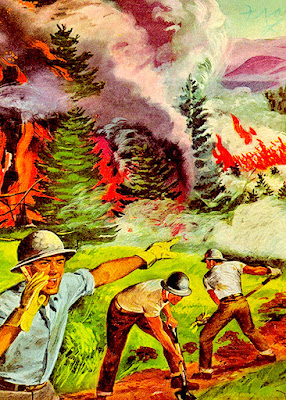 The wild ones
Recently a large barn filled with hay
at our local Stockyards self ignited.
A day later it was still smoking and
a low fog hung over our community.
But then again, we're used to living
in a haze here in Montana. Forest
fires are a natural phenomena and
while said destruction decimates it's
actually nature's way of renewing.
That said, if one's cabin happens to
be swallowed up by an inferno - it's
rarely worth the trade off. And so,
most tend their campfires carefully. 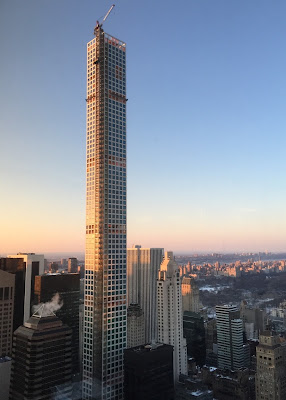 Towering inferno
I've never actually had to suffer
through a conflagration. Sadly my
Mother lived through two quite
traumatic apartment building fires
as a girl in Manhattan. Both left
her rather cautious when it came
to turning up the heat. As I was in
town last week, I saw them putting
the final floors onto the mega 432
Park Avenue. At equal the height
of the Empire State building will
be the tallest residential building
in the western hemisphere. 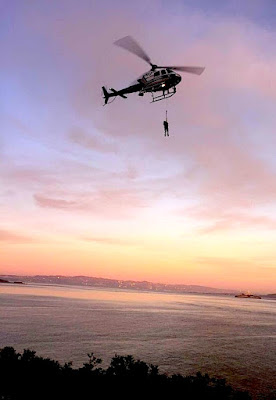 Fire sale
It's 104 units are already almost sold
out including the posh penthouse for
$95 million. My quandary is... how
does one escape from that height in
the event of a fire? Given that no one
has as yet invented a truly fire proof
structure - disaster could strike at
anytime. Unless the lucky owner has
a helipad with helicopter waiting,
they may have to cool their heels as
an inferno blazes half a mile below.
Why tempt fate by being a sitting
duck with your head in the clouds? 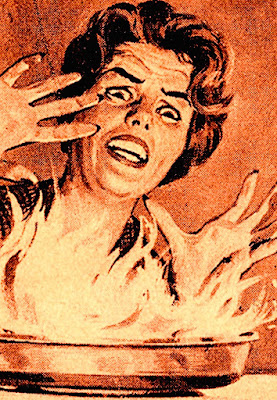 Hot dish
Fire is dangerous. Even the simple
task of frying bacon can suddenly
explode. Dear friend "J" suffered
terrible burns simply because she
mishandled a burning flying pan
of grease. By now you've heard of
the fate of a young gentleman who
decided to celebrate the Fourth of
July by igniting fireworks atop his
head. Somehow some have decided
that they're invincible which only
means disaster. If you can't stand
the heat stay out of the kitchen! 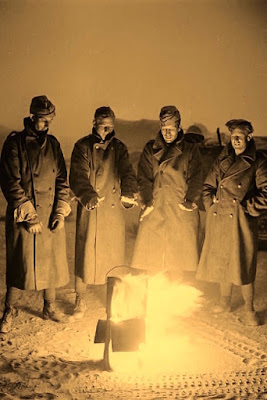 Burning man
Since cavemen first discovered fire -
we've turned the heat higher and higher.
At this point whether one believes in
Global Warming or not, it's obvious
that possibly we have a problem. Add
on top of said consumption a world
with an ever increasing population
and it seems smart to explore better
ways to take care of ourselves and
our orb. While I'm not in any way a
nature boy - I'm doing my best to
make this world a better place for
my grandchildren. How about you?