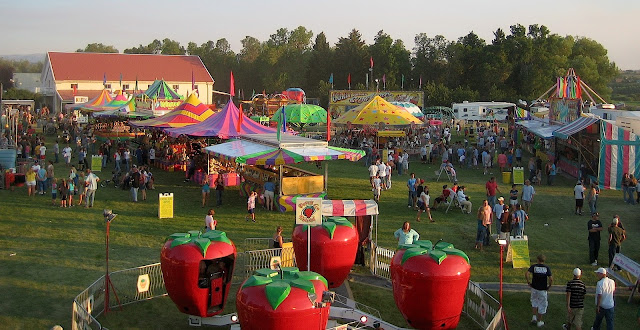 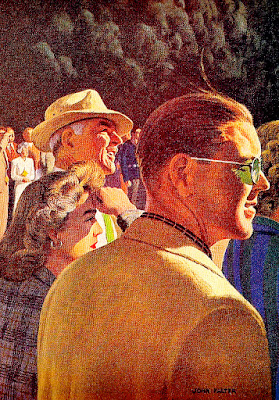 Poor planning
Well, we've done it again. For all of
our planning - something has to give.
Hence once again we're out of town
during the Central Montana Fair. I'm
more than disappointed as said event
is one of a few Montanan experiences
left in these here parts. Thus there are
a plethora of traditions associated with
the event that for a city slicker like me
are rather exotic. Where else can you
crash cars, bronco bust, win prizes,
eat grease, get drunk, and ride on a
Ferris Wheel all at the same time? 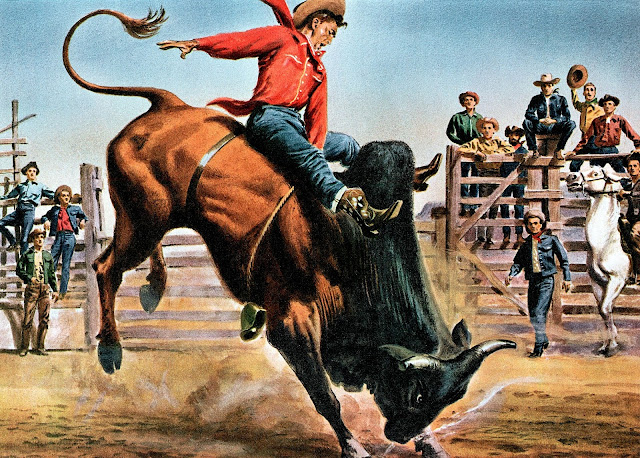 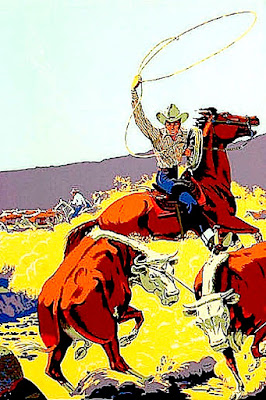 Totally busted
I love a rodeo. You may assume that
my interest is due to the plethora of
cowboys involved. However nothing
is more entertaining than watching
men trying to conquer beasts. Cattle
are not the smartest of animals yet
somehow, someway they're capable
of outwitting even the smartest of
cowpokes. No bull - it's brawn not
brains that insures the longest ride
on an angry bull. And trust me, no
errant cow is willing to follow the
herd. Especially if you want her to! 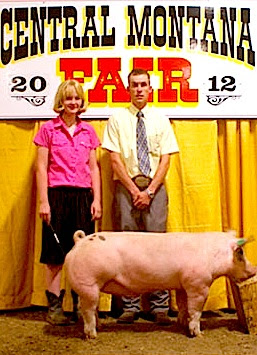 This takes the prize
Little is as hard as farming/ranching
in Central Montana. Yet many locals
have been doing it for generations.
There is a bravery to gambling one's
livelihood against Mother Nature's
capricious ways. Therefore passion,
perseverance, and commitment are
required to reap whatever one sows.
The end result feeds our nation and
that's more than reason enough to
award prizes for the best of the lot.
And trust me, it's more than fun to
watch them all strut their stuff! 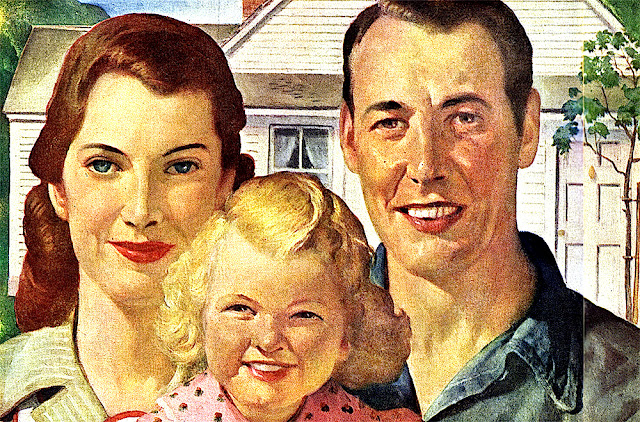 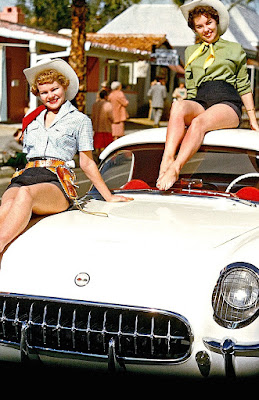 Sorry we missed you...
Most folks come to the fair to socialize.
This is one of the few times that almost
everybody is in the same place all at the
same time. Walking about is rather like
attending a family or class reunion. One
sees folks that they know they know yet
aren't quite sure how they know them.
Moving through herds of acquaintances
requires a lot of smiles, nods, broad
greetings, and hat waving. No wonder
it's such a joyous occasion when one
meets someone whose name they know.
At least for awhile you're off the hook! 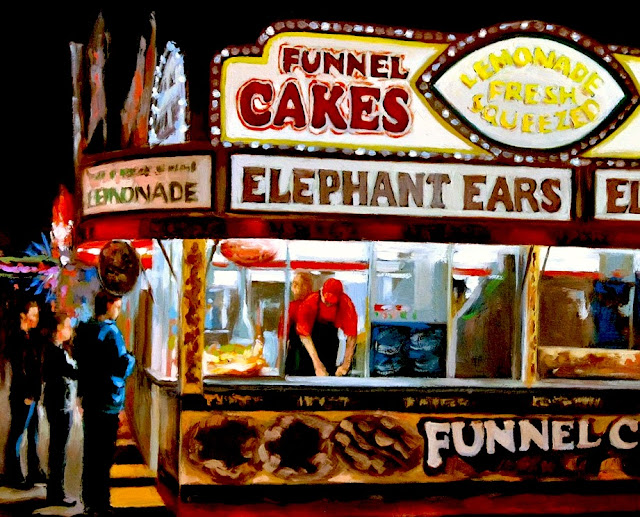 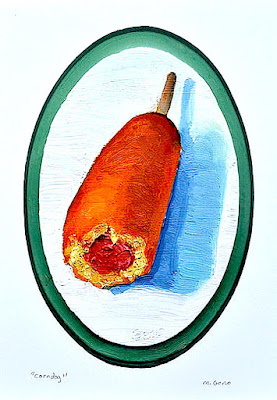 The fat of the land
What could be more American than
Fair food. I'm not sure why it tastes
so good especially as it's obviously
NOT good for you. It's probably the
fresh air or that one must quickly
devour whatever is in their hands
before a swarm of bees attack. If
nothing else said cuisine is nostalgic.
A remnant of times gone by. What I'm
most tempted by are the entries in the
cooking and baking categories. The
fair would be amazing if one could
actually eat those goodies! YUM! 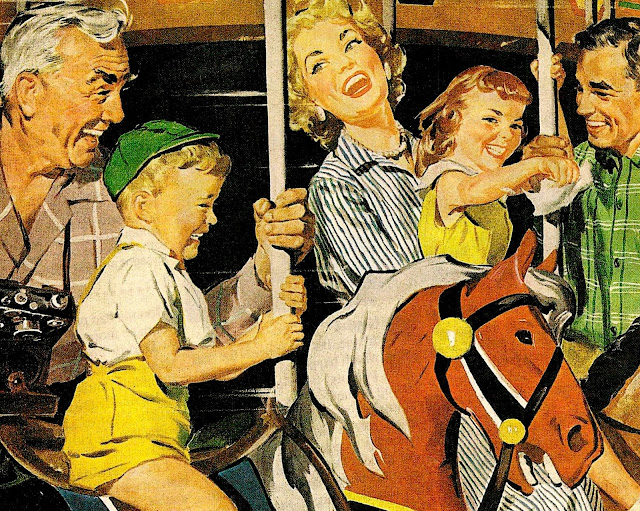 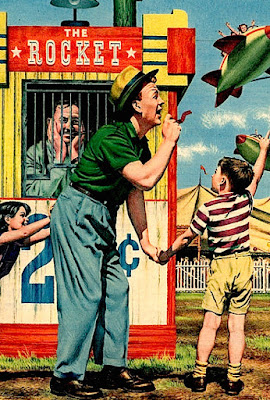 The ultimate roundup
Long ago I learned that going in circles
was something to spurn. The resulting
nausea is reason enough to avoid the
midway's Tilt-A-Whirl, Carousel, or
Spinning Strawberries. However the
risk that someone equally ill at ease
may spew at any time is a risk I'm not
willing to take. Oddly I've no problem
going up and down. Hence I limit my
indulgences to the Ferris Wheel or
Roller Coaster. Given most of the rides
are designed for five year olds - I'm
certain to be safe right? Are you sure? 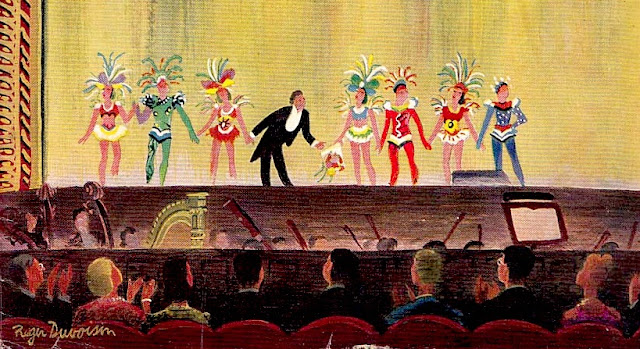 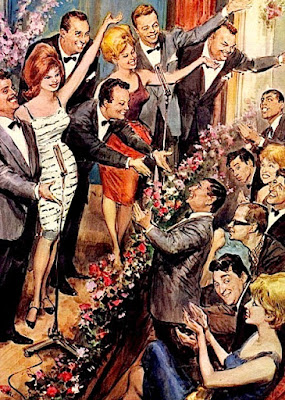 At this stage...
Every year the Fair Board hires big
name entertainers to regale us locals
on Friday night. It's rare that I have
any idea who they are but everyone
assures me that they're quite famous.
This years main attraction is called
"Diamond Rio." Grammy winners,
they've sold over ten million albums
earning three platinum and five gold
records. Yet somehow... they slipped
under my radar. Could I have missed
their appearance at The Carlyle with
Bobby Short? Or Elaine Stritch?! 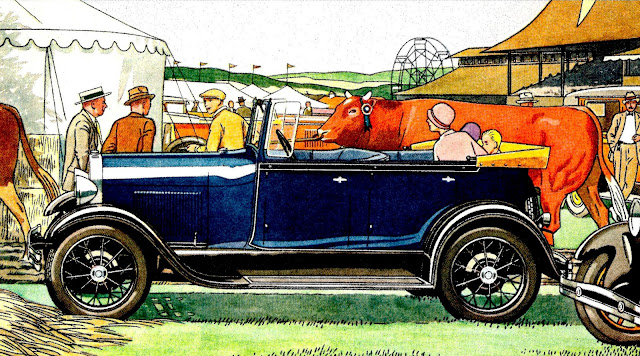 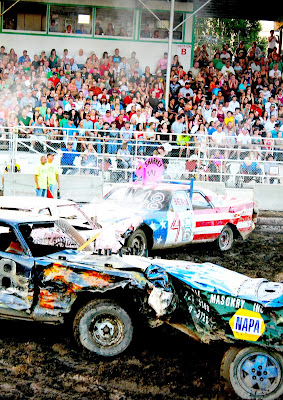 Home alone
The demolition derby is most popular
fair event. For months several of our
neighbors have been prepping their
cars for destruction. That explains
the trailers topped with sedans that
have been sitting out front. While
we'll miss this years derby - I won't
miss said lawn ornaments. My hope
is that all have a bang time to the
extent that whatever is left of said
vehicles isn't worth towing home.
Whether anybody else thinks that's
fair or not, I really don't care!
Posted by montanaroue at 4:00 AM