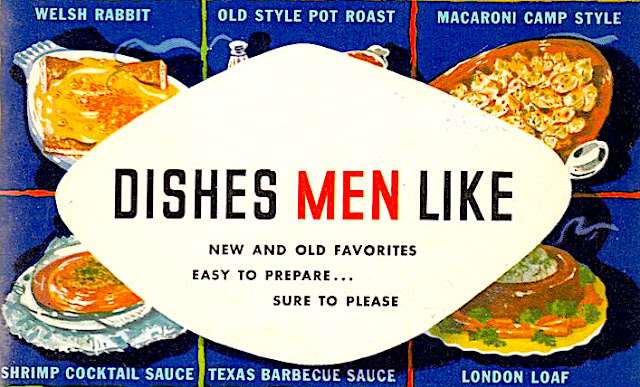 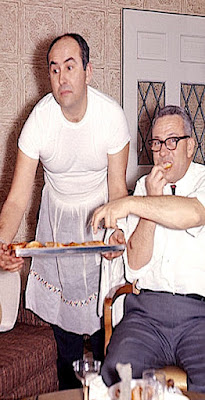 Just like mother used to make
They say that food is the way to a man's heart.
Lately I've been rather nostalgic in a culinary
way. In that suddenly long forgotten recipes
have come to mind. And like dear old friends,
it's more than nice to reconnect. I'm not talking
about sacred things that mother used to make.
But rather, simple, easy and delicious dishes
that at one time were fairly regular parts of my
edible repertoire. Thus not a day passes that
I don't take a kitchen stroll down memory lane.
Made all the easier in that I rarely use a recipe.
And if I do - it's from my dear old companion -
The Household Searchlight Recipe Book. 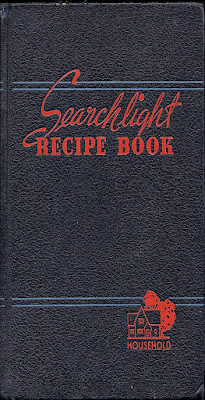 Light on the subject
First published in 1931, our grandmother's
generation considered it quite modern. Upon
opening, one finds easy-to-use tabbed pages
with very brief recipes for all those things
most of us know how to do naturally. My
initial edition was a family hand me down
found in a box. However years later, it fell
apart from use. Fortunately I found another
in a thrift shop to replace what over time
had become a trusted advisor. One that now
sits on the shelf ready and waiting to set me
straight. Well, at least when it comes to the
culinary classics such as pie crust, etc. 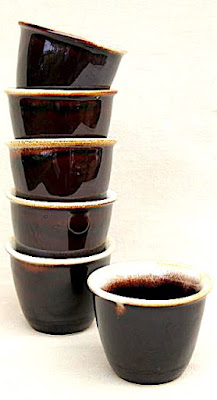 In my cups
For years two of my Mother's brown drip
custard cups sat idle on the top shelf of
our kitchen cupboard. Fond reminders of
times past, I never pulled them out. Then
one day last winter I craved some baked
egg custard. In part because we can buy
local, fresh, free-range organic eggs just
plucked from the nest prior to purchase.
So I grabbed my searchlight and learned
why our mothers were smarter than we
thought. You see, there is little easier than
roasting a chicken, baking some potatoes,
and mixing eggs, milk, sugar for dessert.

Boys room
However many of the things I'm cooking again
have nothing to do with my mother. Rather they
reconnect me with my formative foodie years.
I'm a self-taught chef in that my mother thought
a man's place was anywhere but the kitchen. As
compared to my grandson "H" who cooks on a
regular basis. While only three, his mom often
puts him to work in the kitchen. The result being
that "H" is learning chemistry, mathematics, and
responsibility. All while taking enjoying the art
of cooking and enjoying the end result. Which
makes me thing that someday "H" may want to
have his own copy of the Searchlight book! 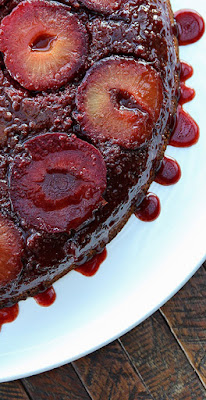 Topsy turvy
In part my nostalgia is driven by the reality
of cooking on a daily basis. It's monotonous!
Add that the busier one is - theres less time
to fuss. Hence I'm pulling old favorites out
of my hat. Today it's plum upside down cake
for which I have no recipe since I first made
one back in the eighties. First I heat brown
sugar and butter in my favorite skillet. Add
six pitted and halved plums face down. Then
let it get nice and bubbly, Next I pour on top
my favorite butter cake recipe (or you can do
also do a mix) and then bake. When cool flip
it onto a plate and serve with whipped cream. 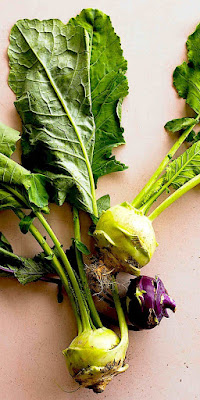 Forgotten friend
Sometimes even I surprise myself. Recently
I've been craving Kohlrabi. That sputnik like
vegetable most have no idea what to do with.
Frank's mother always served it raw, peeled,
and thinly sliced. However many years ago
somebody taught me to cook it a la francaise.
Post peeling I cut it into small cubes. Then
gently simmer it in chicken stock for twenty
minutes of so. Next it's drained and sautéd
in butter. And if I'm feeling really gourmet,
I add a splash of cognac to deglaze the pan.
I'm certain Frank thinks I'm nuts for all of
the fuss. Yet it's my version of comfort food. 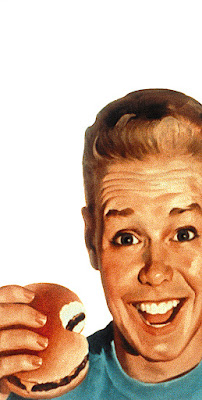 Food for thought
In the end food is much more than sustenance.
The fact is we are what we eat. Meaning that
whatever we dish out somehow defines who
we are. Which causes me to worry about those
kids raised via the drive through at McDonald's.
Will the memory of chicken nuggets warm their
hearts some day? Sadly, not only is that reality
unhealthy - it's unappetizing. In a few weeks
my eldest grand daughter "M" is visiting. And
much of our time will be spent together in the
kitchen making memories. Given I want only
the best for her, I plan to serve up lots of lovin'
from the oven! That's my recipe for her success!