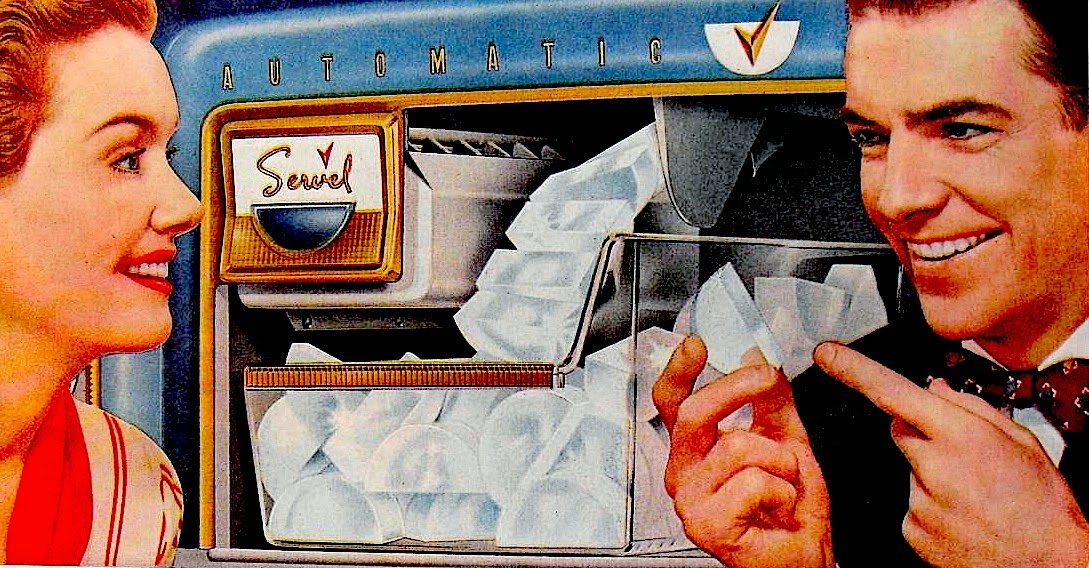 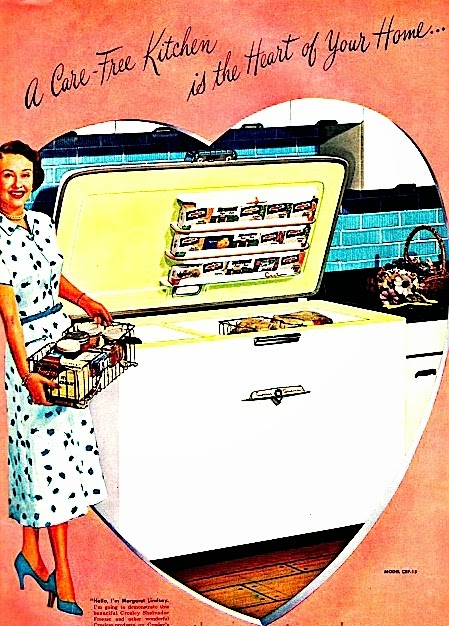 Polar exploration
I've recently discovered the joy of
a large, shiny white object hiding
in one's basement. While you may
think this man has had everything
he needed, one prized item never
seemed within my reach until now.
I adore my deep freeze. And let me
assure you that for this roue' - the
realization of the benefits of said
convenience are at least equal to
what cavemen felt when they sat
by their first personally initiated
conflagration. Hot damn it's great! 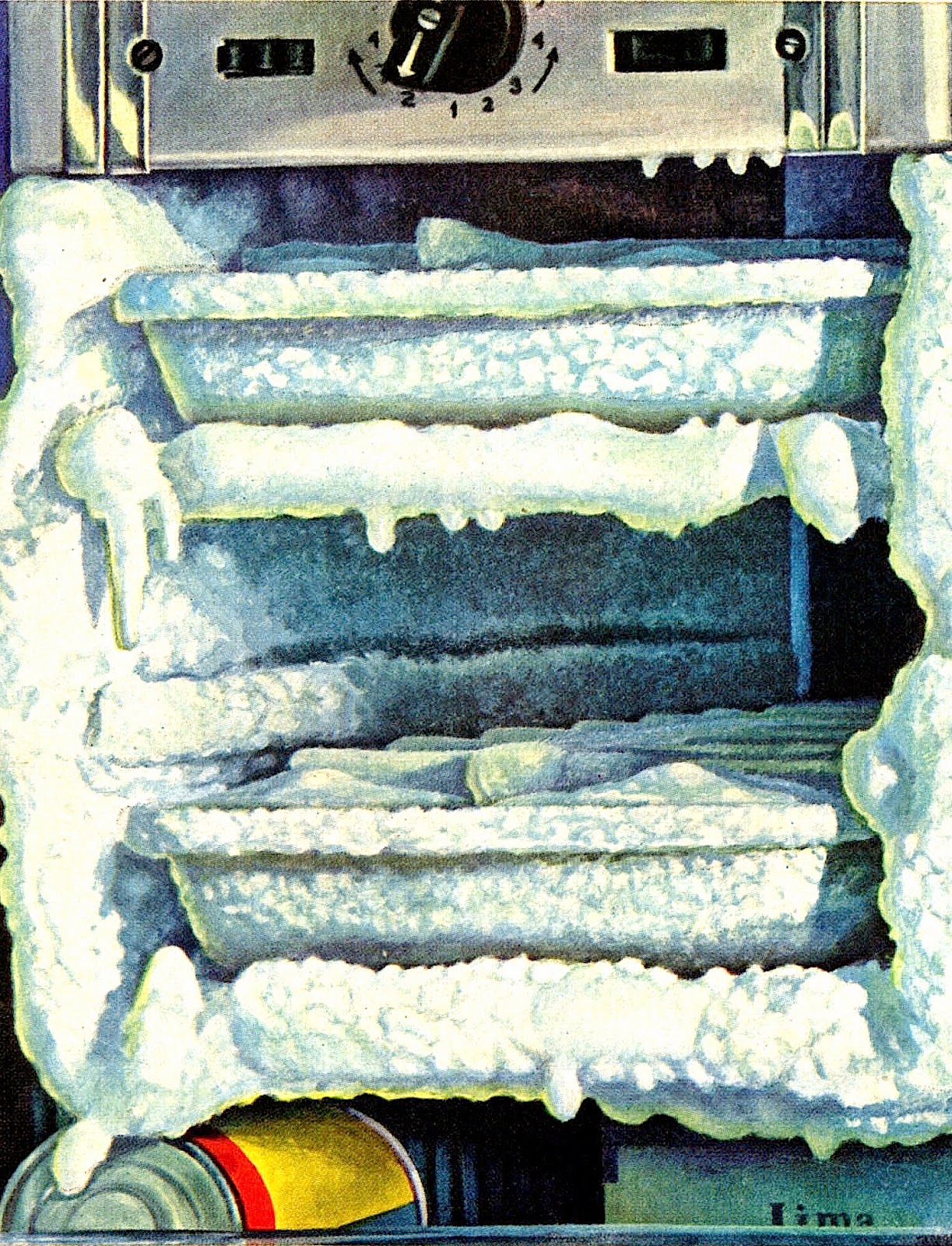 Go with the floe
In my first apartment the fridge
had a teeny tiny freezer. Within
it's minuscule confines two ice
cube trays barely fit. And as the
undefrosted frost slowly grew,
it swallowed up what little room
was left. Once it was all frozen
solid one had to empty the entire
fridge, turn off the juice, melt the
inhabitants of said crevice, and
mop up the mess. Then after all
was done, you waited hours for
new cubes to fill your cocktail. 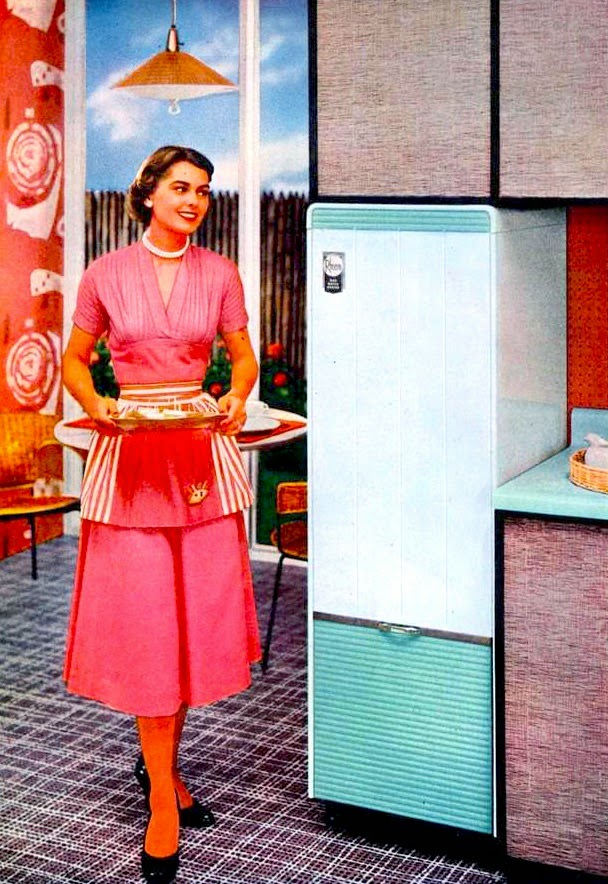 Arctic blast
Frank's mother daily descended down
to the basement to rifle through her
overstuffed deep freeze. A veritable
Aladdin's treasure trove, said stash
enabled Mom to make fresh cherry
pies in the middle of winter. Plus a
herd of deer, elk, antelope, cows, and
lambs lay silently at rest awaiting
resurrection as a home cooked meal.
As a city boy, I never understood the
idea of stocking up. We shopped for
dinner at the corner grocer nightly.
Who needed a personal polar retreat? 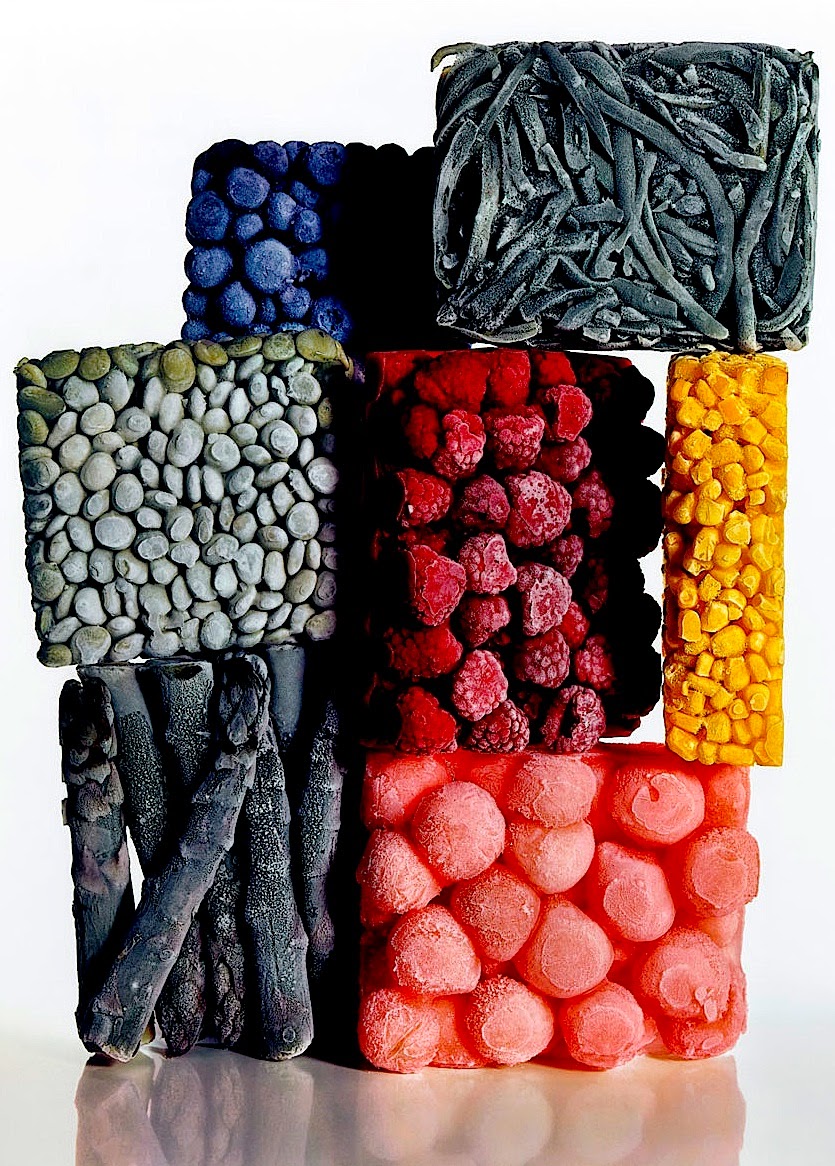 Convenience store
What I didn't understand was the
convenience of having homemade
goodies ready anytime. With my
arctic blast life couldn't be easier.
It's frozen tundra is filled with
homemade beef and chicken
stock. pasta sauce, chili, mac &
cheese, and twice baked potatoes.
Plus the requisite pre-packaged
bits and pieces of carcasses. All
in a holding pattern ready to make
my life easier. As long I remember
to defrost them... well in advance. 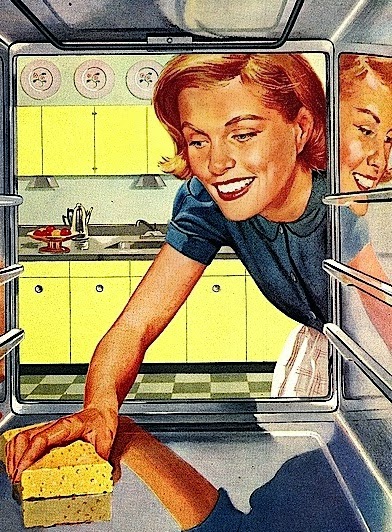 Toxic cleanup
Whoever invented "frost free"
should be canonized. It's certain
they have a spot in heaven right
next to the individual who also
figured out how to make your
oven "self clean". Before said
miracles, one had to spend their
days breathing in toxic fumes
as they swabbed, waited, and
wiped off the debris of dinners
past. Fortunately we survived
to discover new ways to clean
up our act faster and easier. 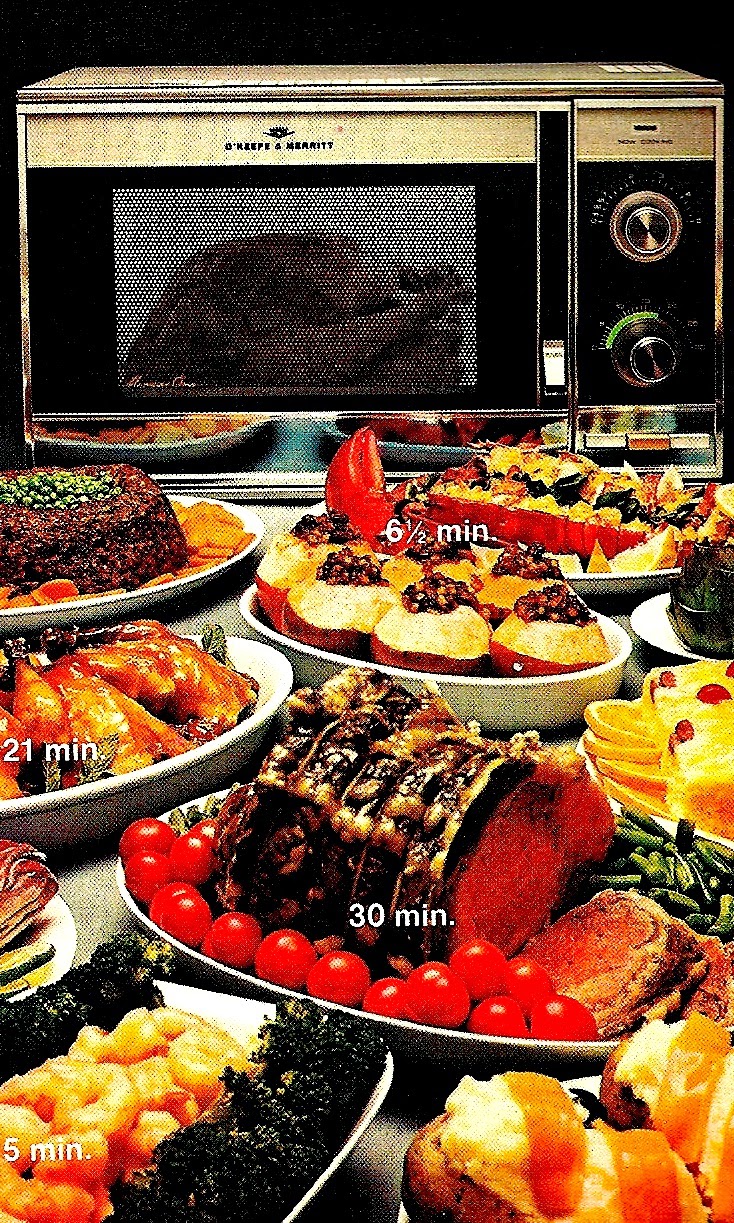 Blast from the past
I'll never forget zapping my first hot dot
in a massive stainless microwave at the
1964 World's Fair in Flushing. Frankly
we might have all been healthier if what
has now become a kitchen staple never
was invented. Instantaneous gratification
does not necessarily taste good. And now
that everybody is doing it, who knows if
your entree has been nuked or sauteed.
Frank and I find the idea of rearranging
the molecules in one's food suspect at
best. Hence there is NO microwave in
our new kitchen. Resale be damned! 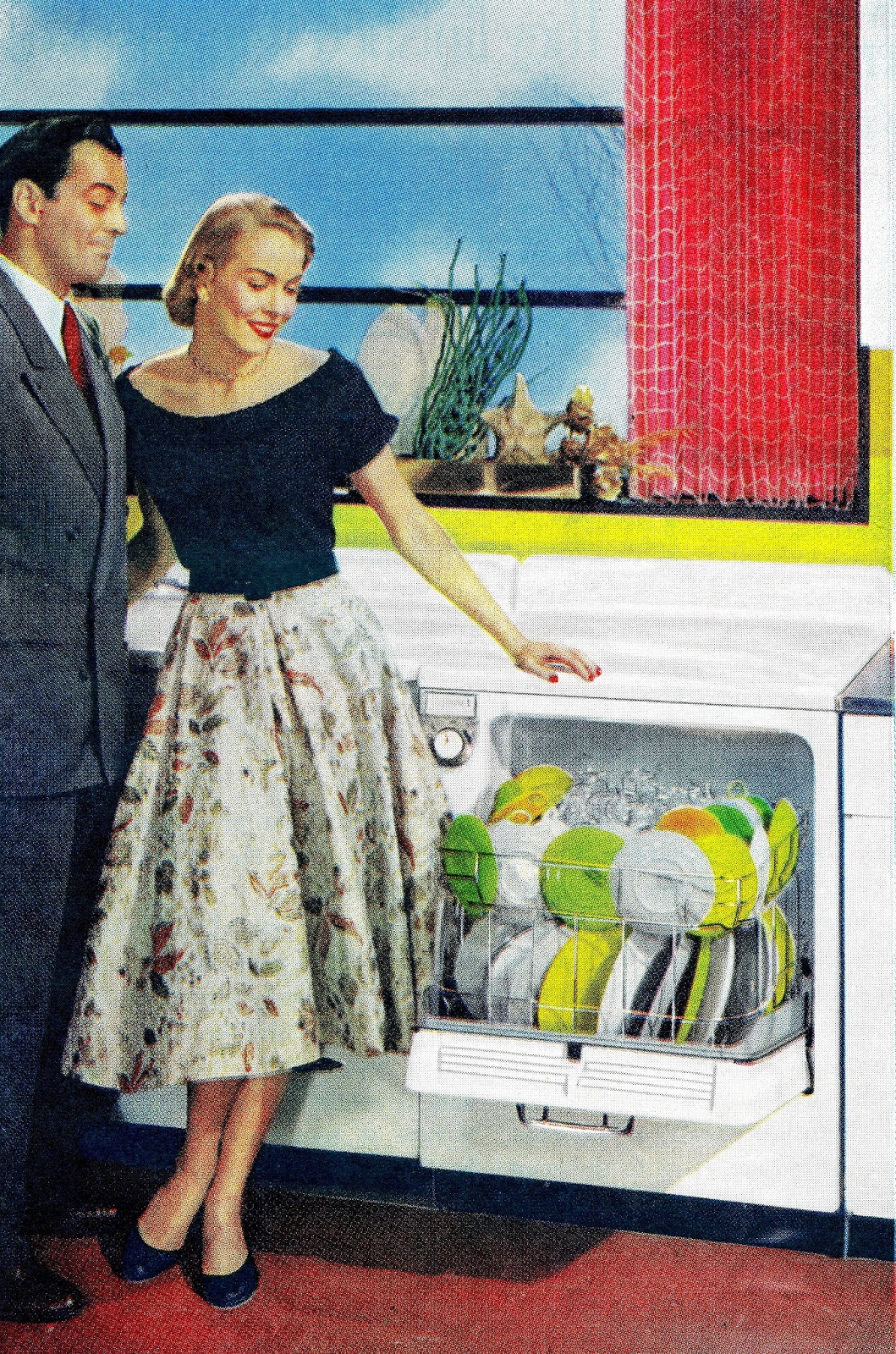 Old dog, new tricks
Like it or not technology is here to
stay and better the devil you know
when it comes to all things culinary.
I'll never forget my first Cuisinart.
It has become a trusted friend and
ally. While some inventions are but
blips on life's radar, others change
our lives forever. Just think about it
the next time you load a dishwasher.
What is now mundane was once the
ultimate luxury. Who knows what
they'll come up with next. My hope
is it's an automatic dish unloader!
Posted by montanaroue at 4:00 AM