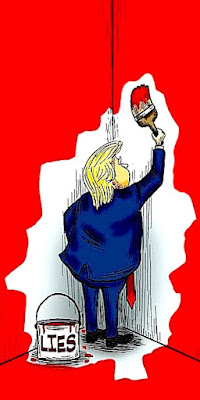 Limited spew ability?
Sages have oft advised "the less said the better."
Others have suggested that the most vociferous
of us "doest protest too much." Mark Twain is
credited for suggesting "It's better to keep your
mouth shut and appear stupid than open it and
remove all doubt." Yet some folks are incapable
of limiting their verbal output. Hence they spew
and spew as they say more than they should. To
the point of no return where they get themselves
and others into trouble. Unfortunately our big
man in Washington can't put a lid on his stream
of consciousness. Causing all to wonder "does
he realize what he's saying?" Or doesn't care... 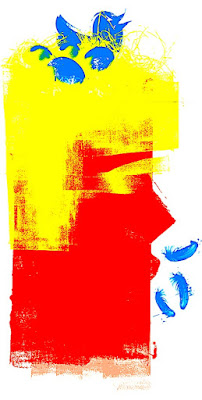 Flight risk?
As if uttering foolishness wasn't enough, our
Chief Executive loves to let his fingers do the
talking. Hence his plethora of random tweets
are considered the equivalent of presidential
edicts. Even if they are misspelled, filled with
falsehoods, and hence reprehensible at best.
For those keeping count, the Washington Post
tallied President Trump's three thousand and
one false of misleading statements made since
taking office. An average of six point five per
day. No wonder we wonder what constitutes
truth versus purposeful misrepresentation of
the facts. At this point who are we to believe? 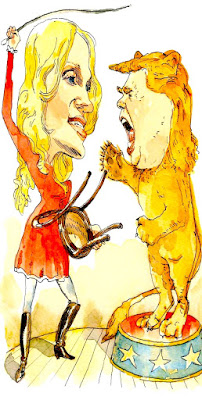 And she ain't lion?
Birds of a feather tend to flock together. Take
Presidential Advisor KellyAnne Conway the
queen of alternative facts. Just yesterday while
appearing on CNN'S State of the Union - said
lady in question denied that the White House
has a credibility crisis. All as Rudolf Giuliani,
Mr. Trump's new chief legal advocate struggled
when it came to speaking his piece. In a week
or less he has uttered conflicting statements.
Often calling in to question the veracity of
anything either he or his client has said. Thus
many are asking... "did he or didn't he?" Or
worse, is anybody ever going to tell the truth? 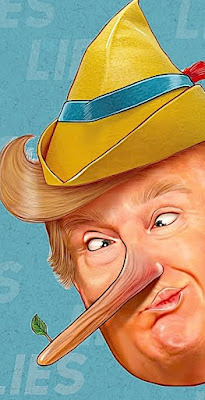 Long way out?
Can't our President figure out there is safety in
numbers? Mies van der Rohe's credo was "less
is more." However others have suggested that
too much of a bad thing can work in your favor.
At least that was the opinion of Vladimir Lenin
who is quoted a having said "A lie told often
enough becomes the truth." Causing at least me
to consider that Donald Trump just may have a
method to his madness. That all of his opposing
force's contradictory statements are coordinated
to insure that ultimately - Mr. Trump's message
comes across exactly as he wants it to. And that
whether it's true or false really shouldn't matter. 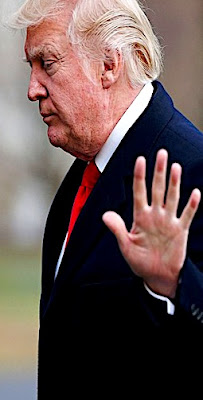 Talk to the hand?
I don't know about you but I wish somebody
would reinforce to our top man with Midas
touch that silence is golden. And that rather
than spin out of control, leaving the experts
to come to their own conclusions just might
be the safest way to get out of this mess. Of
course in the end Mr. Trump may become
speechless. Invoking the Fifth Amendment
is an inalienable right. But it's also an option
he has maligned on the record. In closing I'll
let the President of the United States speak
for himself. "The mob takes the fifth." If
you're innocent why are you taking the fifth?"
Posted by montanaroue at 4:00 AM