DANCE OF THE SEVEN VEILS 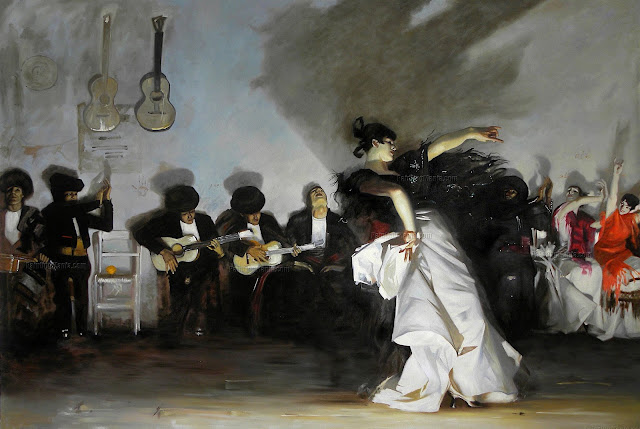 Routine violation
The other day I got a call from a long lost
professional colleague. It had been at least
two years since we chatted so we had a lot
of catching up to do. After discussing our
industry, the phenomena of "millennials",
and friends in common we segued to the
state of our union. Given we didn't know
where the other stood - we danced around
the forbidden subject - politics. Until finally
the braver of we two asked if I was a "Trump
supporter." Noting that if I was - it was OK.
To which I responded - "absolutely not." And
soon we kindred spirits were dishing the Don.

Purgatory Waltz
In times like these it seems that many of us have
no idea who to trust. Hence we all tend to dance
a tenuous limbo between our true feelings and
avoiding the inevitable. Within my personal orb
it's rare that I interact with someone who thinks
that some crook from Queens is going to make
America great again. However when it comes to
strangers or broader acquaintances, it's obvious
that no matter what side of the fence you're on,
you don't want to risk being on the wrong side.
Which means that most of us are beyond afraid
to tell the other our truth. And that's no lie. The
result being that we dance on the edge of reason.

Fair & Square
The idea that we freely participate in this odd
square dance of do-si-dos proves we're out of
sync with reality. Dancing with our enemies,
as we spin around the issues as we flirt with
yet never make a true commitment. In theory
such social behavior is considered polite. Yet
said sterile back and forth avoids insures that
we continue to get farther from the truth. And
that fact makes me inclined to sit this one out.
After all, how can I possibly be your partner
if I've no idea where you stand on the issues.
Especially those that possibly could endanger
freedom and justice for all. Something's off.

Out of step
Yesterday ABC canceled the recent and highly
successful relaunch of Roseanne. And it was all
because Roseanne Barr publicly tweeted her true
feelings. Which just happened to be highly racist.
Until then she had been able to tap dance around
the truth by appealing to our base instincts. Yet
while in theory such an approach enabled some
to gain control - most Americans - no matter red
or blue - democrat or republican - conservative
or liberal - find such prejudicial spewings to be
UN-AMERICAN. Which bodes the query - how
could such an obvious bigot dance their way into
our hearts and homes? Are we really that dumb?

Burlesque show
The problem is we don't know who to trust. Hence
I've no interest in dancing with those unwilling to
reveal who and what they are. Subterfuge is in my
opinion waste of my time. Back in the fall of 2016
there were virtually no Trump Pence signs out on
lawns of Lewistown. Yet sixty eight percent of my
friends and neighbors voted for the rogue. Hiding
your truth makes it a lie. So how many of you are
also bigots? Racists? Homophobes? If you're not
ashamed of the mess you caused - dance with the
one you came with. Don't be a tease. Strip bare all
of your hidden agendas for the world to see. Better
yet, do us all a big favor and sit the next one out.
Posted by montanaroue at 4:00 AM